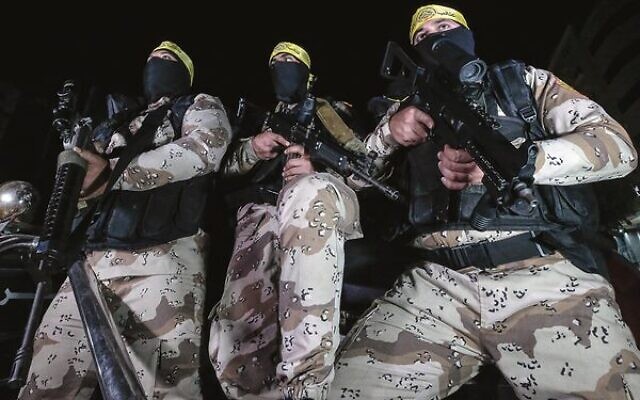 Members of the al-Aqsa Martyrs' Brigades at a press conference in Gaza on Tuesday.Photo: EPA/Mohamed Saber

ISRAELI leaders this week hailed security forces after a rare daytime operation in the West Bank during which three Palestinian terror suspects were killed, but Palestinian officials condemned the shootings with mourners at their funerals calling for reprisals.

“Our forces proved today, again, that there is no immunity for terrorists,” Prime Minister Naftali Bennett said in a statement. “Whoever hurts us will be hurt.”

The three gunman were allegedly behind recent shooting attacks against Israeli soldiers and civilians. They were apparently members of al-Aqsa Martyrs’ Brigades, a coalition of armed groups associated with the Palestinian Authority’s ruling Fatah party.

According to police, officers from the counter-terrorism Yamam unit first sought to arrest the suspects. Police also said officers fired when they saw the suspects getting ready to shoot at them and killed them before they fired a shot.

“I recently ordered that preventive actions against shooting attacks and troop presence in central arteries and areas of the [West Bank] be stepped up,” Gantz wrote on Twitter. “We’ll continue with proactive operations, prevent [attacks] and capture anyone who tries to hurt people.”

Israeli Border Police chief Amir Cohen spoke with the head of the Yamam, lauding the troops who took part in the raid.

“You again proved that Israeli citizens have someone to rely on. You acted courageously and caused the thwarting of a dangerous terror cell that intended to continue carrying out terror activities,” Cohen was quoted as saying in a police statement.

The gunmen were identified as Ashraf al-Mubsalit, Adham Mabrouk and Muhammad al-Dakhil by Palestinian media, which said they were affiliated with the al-Aqsa Martyrs’ Brigades. A Fatah spokesperson confirmed that the three were Fatah members.

The al-Aqsa Martyrs’ Brigades, a loose coalition of armed groups affiliated with Fatah, has been largely dormant since the Second Intifada two decades ago. In a 2007 agreement, hundreds of the terror group’s members surrendered their arms in exchange for amnesty from Israel.

Thousands of Palestinians participated in the funeral of the three men in Nablus on Tuesday afternoon.

Hamas had called for mass participation in the funeral.

“Let it be a march that infuriates the enemy, and sends a message that we are the righteous ones, and that resistance is our path to restore the rights that have been taken from us,” the terror group said in a statement. “Brigades! Qassam! Revenge! Revenge!” Palestinians could be heard chanting at the funeral, referring to the armed wings of Islamic Jihad and Hamas respectively.

The Palestinian Authority Foreign Ministry condemned the fatal shooting of the Palestinian terror suspects at the hands of Israeli forces “in the most severe terms,” saying they were “executed”.

“This crime is the latest in a chain of extrajudicial executions committed by the forces of the occupation,” the PA Foreign Ministry said.

The Palestinian Authority cabinet called for an international investigation.

“The cabinet calls upon the United Nations and international human rights groups to condemn this heinous crime and work to bring the perpetrators to justice,” the ministers said in a statement.

Joint List MK Sami Abu Shehada also spoke out against the killing of the terror suspects, calling it an “extrajudicial execution against three Palestinian youths”.

“This is a serious crime that adds to the daily crimes of the Israeli occupation,” he said.

He also lashed out at Israeli society for supporting the “occupation’s crimes,” and the press for “accepting the army’s narrative and constantly echoing it through all media”.

Following the raid, reports said Israeli troops were searching for an additional member of the suspected terror cell. It was not clear if the fourth person fled or was not present when soldiers killed the other three suspects.

According to an unsourced report in the Walla news site, officials decided to order the operation after the Palestinians were seen getting in a car with guns and ammunition.

The Ynet news site reported that Israel received intelligence that the group had been planning an attack on Tuesday night. The media outlet, which did not cite a source, also said that before being killed, the cell “acted like wanted suspects, moving between safehouses”.

Recent weeks have seen a spate of shooting attacks directed towards Israeli security forces and military positions in the northern West Bank, most recently on Saturday evening when shots were fired at a Border Police vehicle near Jenin. At least five such shooting attacks have been carried out in the past two weeks, none of which have caused Israeli injuries.

An Israeli security official said the Palestinian suspects were on their way to commit another attack, necessitating their intervention.

“They were a ticking bomb,” the official said.