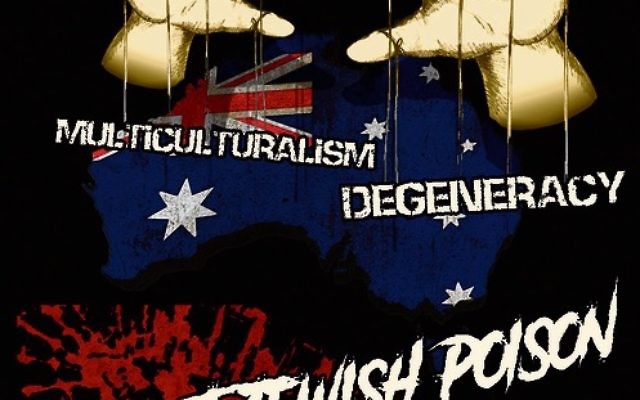 ECAJ research officer Julie Nathan stated in her annual Report on Antisemitism in Australia that more than a third of 366 incidents reported this year can be traced to AR, a neo-fascist group targeting Jewish people and the LGBTIQ community at universities, schools and synagogues.

In her report, Nathan stated that AR’s “small numbers mask their intense and concerted activities”.

AR “openly espouses National Socialism (Nazism) as an ideology. Its views are white supremacist, antisemitic, anti-homosexual and antagonistic to ‘non-white’ immigration”, she stated.

More generally, Nathan reported a surge of calls on social media for Jews to be killed. “Most of this incitement occurs on Gab, a Twitter-like platform, which is a haven for extremists and racists. Many racists moved over to Gab when Twitter closed their accounts in December 2017.”

In October this year, Gab suspended its platform, but only for a week, after the murder of 11 Jews at a synagogue in Pittsburgh by a man who had incited against Jews on Gab, she noted.

The ABC came in for criticism as, distinct from other Australian media outlets, “it permits ­antisemitic comments to remain online and unmoderated”.

The NSW National Party was targeted for infiltration by a dozen members of a far-right outfit, the Lads Society – and Nathan described “a noticeable emboldening of the far right”, with predators who had targeted Muslims in 2015-17 now switching their attention to Jews.

Nathan stated that of the 366 reported incidents of antisemitism, 43 per cent were attacks involving assault, abuse, vandalism or graffiti.

Nathan said that much of the harassment occurs on Shabbat and yom tovs as Jews are walking to and from shule, “the easiest and most convenient places and times for them to drive around in their vehicles on the lookout for Jews to target for abuse, harassment and intimidation”.