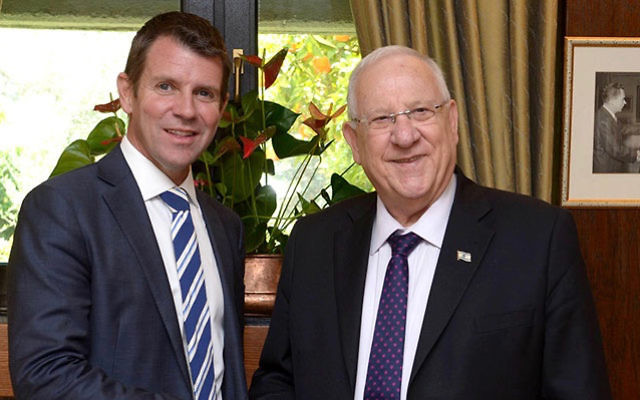 ISRAELI President Reuven Rivlin met at his residence on Sunday afternoon with NSW Premier Mike Baird who is visiting Israel. His arrival in Israel marked the first official visit to Israel by a NSW Premier in living memory.

President Rivlin welcomed Premier Baird and reiterated his disappointment at having been unable to fulfil his planned visit to Australia in March.

He said, “I was especially disappointed because I know and appreciate the tremendous cooperation that we have, which is an expression of the close friendship between Israeli and Australian people.”

The President added that Israel was greatly concerned about the situation in the region, and praised Australia for their strong stance against extremism.

He said, “Even though you are on the other side of the world, you know very well that the spread of hatred and the instability that we are witnessing in the Middle East is a danger to the whole world, and I want to thank you for your country’s strong position against extremism. To Israel’s north, five armies are fighting each other, and none of them are friends of Israel. The Islamic State thugs are carrying out acts of terror across the world, and the whole free world must be united against this threat.”

The President also praised the strong and growing economic cooperation between Israel and Australia, and noted the importance of the new innovation partnerships now being created between startups and innovators in the two countries.

Premier Bard thanked the President and said that he hoped he would be able to visit Australia in the near future. He added that he was especially proud to see the strength of the growing cooperation between Israelis and Australians, and noted that this was the best answer to the terrorists, by continuing to nurture close ties, and prosperous partnerships.