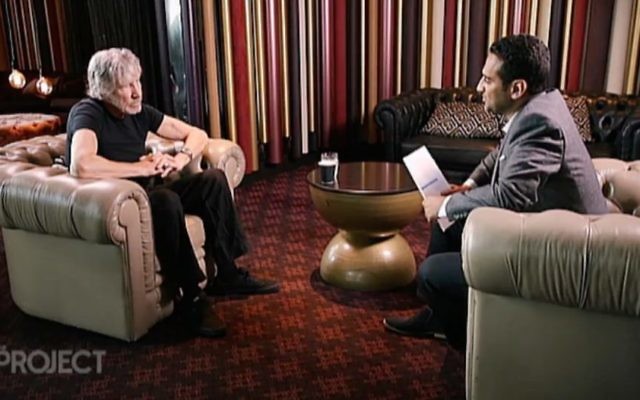 Roger Waters being interviewed by Waleed Aly on The Project. Photo: Screengrab/Channel 10

HOW do you sanitise a hate-filled political campaign that has repugnant historical precedents?

You do what host Waleed Aly did with his recent interview with BDS (boycott, divestment and sanctions) hardliner Roger Waters during his recent appearance on the Channel 10 infotainment program The Project.

You reclassify the BDS movement, as a “creative” boycott rather than what it really is. For its repeatedly attested real aim is the destruction of the Jewish State of Israel.

Love or hate Benjamin Netanyahu the “raison d’etre” of the eliminationist BDS movement is not to change this or that Israeli policy.

Of course, Aly’s soft-sell of the boycott movement went unchallenged and those of us with the knowledge to do so haven’t been invited onto the show to voice dissent.

Some of those involved in the BDS movement have indicated its real motives.

The BDS’s chief, founder and operator in the United States is Omar Barghouti.

“The current phase has all the emblematic properties of what may be considered the final chapter of the Zionist project,” he (Barghouti) has said. “We are witnessing the rapid demise of Zionism, and nothing can be done to save it, for Zionism is intent on killing itself. I, for one, support euthanasia.”

Other BDS ideologues say: “The real aim of the BDS is to bring down the state of Israel … That should be stated as an unambiguous goal. There should not be any equivocation on the subject. Justice and freedom for the Palestinians are incompatible with the existence of the state of Israel” (As’ad Abu Khalil).

“OK, fine. So BDS does mean the end of the Jewish state … I view the BDS movement as a long-term project with radically transformative potential … In other words, BDS is not another step on the way to the final showdown; BDS is The Final Showdown” (Ahmed Moor).

Mick Jagger and the Rolling Stones, Sir Elton John, Radiohead, Aerosmith, and Australia’s Nick Cave have all had major recent concerts in the vital open democracy of Israel.

This has sent the ex-Pink Floyd musician meshugge. For Roger Waters is notorious for his hard-line extreme positions on Israel, positions that he has made clear in earlier statements and with his recent statements in Australia.

There are direct quotes from Waters himself on the BDS: “The situation in Israel/Palestine, with the occupation, the ethnic cleansing and the systematic racist apartheid Israeli regime is unacceptable… They believe that everybody that is not a Jew is only on earth to serve them and they believe that the indigenous people of the region that they kicked off the land in 1948 and have continued to kick off the land ever since are sub-human”.

Waters was not only appearing on The Project while in Australia.

Just before dancing with Aly on The Project, an Australia Palestine Advocacy Network forum was held at the Athenaeum Theatre in Melbourne.

The BDS forum was promoted by the Green Party’s Adam Bandt with posters inside and outside his office.

The forum in Melbourne was hosted by Sydney-based Israel hater Anthony Lowenstein.

Something extraordinary happened; Roger Waters embarked on a rant that has shocked and offended many within the music industry with its open hatred, bigotry and homophobia.

Waters’ maniacal rant against his fellow musicians only came to light after the recording of the forum was revealed on the music website Noise11.

These are artists that had all recently held concerts in Israel so that their fans had an opportunity to see them live.

As the Jerusalem Centre for Public Affairs concludes regarding the BDS, “It is a highly controversial notion even within far-left circles.”

In a December 2011 lecture, Ha’aretz journalist Amira Hass said, “As someone who grew up in a Marxist environment, I say, Don’t make a religion of it.”

In February 2012, Norman Finkelstein, one of the most vocal critics of Israel, stated that the BDS movement was a “cult” and that those who ran it were dishonest. He concluded by saying, “At least be honest what you want – We want to abolish Israel and this is our strategy for doing it.”

I question The Project and wonder if “our” Waleed will be fronting for any other fanatics like Waters to his millennial audience. Few of them will guess Waters’ real agenda.

And I’m fairly certain that no one with any informed knowledge will be asked on the show to question, laugh or joke with Aly.

MICHAEL DANBY is the Federal Member for Melbourne Ports.