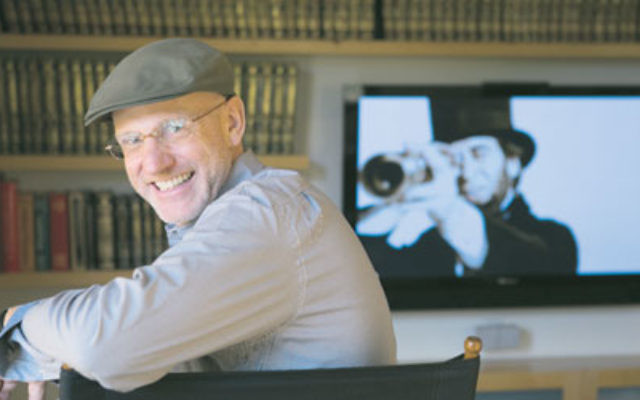 The creator of the cult film When Do We Eat?, which starred Jack Klugman in his final film role,is in Australia this week for guest appearances at Limmud Oz in Melbourne, where he will join panel discussions as well as talk about his religious blog, The Accidental Talmudist.

His 2006 comedy When Do We Eat? is set around the world’s fastest seder that goes horribly wrong and features a cast that includes Klugman, Michael Lerner, Max Greenfield and Lesley Ann Warren.

“They were all opinionated actors, so the shoot was not always easy, but we captured something very real in the film,” Litvak says by phone from Los Angeles

“When it came out in the US it did okay at the box office, for a small independent film, opening in about 30 cities – most independent films disappear without a trace instantly.”

However, being the first film by Litvak and his wife Nina, they did not earn much from the film or DVD sales.

“We were saddened by that because we had put our heart and soul into the film,” says Litvak, who was born in Santiago, Chile and moved to New York whe he was five. He is a graduate of Harvard College, NYU Law School and the UCLA School of Theatre, Film and Television.

“What has been amazing is that since I started writing The Accidental Talmudist, the Facebook pages have taken off way beyond anything we expected and all of a sudden When Do We Eat? has become a bona fide hit.”

Litvak’s next film project, Saving Lincoln, an inspiring drama about the relationship between president Abraham Lincoln and his longtime bodyguard Ward Hill Lamon, was released last year after he had been working on it for more than a decade.

“Just when Nina and I had finished the third draft of Saving Lincoln and our agent was excited about submitting it to all the big studios, Steven Spielberg announced that he would be making a bid-budget film on Lincoln,” he explains.

“That was crushing news – after two years’ work our project was completely non-viable.”

Years later, after Spielberg made his $65 million Oscar-nominated Lincoln starring Daniel Day-Lewis, Litvak decided to revisit his Lincoln script after discovering a new way of making it using a process called cinecollage, the blending of vintage photographs with state-of-the-art green-screen technology.

Litvak would use hundreds of Civil War-era photographs to create digital backgrounds that would allow the movie to be filmed entirely on a soundstage in downtown Los Angeles without having to spend money travelling to film locations and building costly sets.

Actors Tom Amandes as Lincoln, Penelope Ann Miller as Mary Lincoln and Lea Coco as Lamon worked with just a few historical props in front of a giant 50-metre-wide green screen that would later be filled with the digital composites of the original historic ­photographs.

The result was a film set within actual photographs of the American Civil War that was made with a budget of less than $1 million.

“This hasn’t been done before for a whole film,” he says.

Litvak used Facebook and social media to spread the word about the film, launching a Facebook page that ended up with 80,000 followers and used the crowdfunding website Kickstarter to raise about $60,000 to help towards marketing and distribution costs.

“It used to be if you wanted to tell a wonderful story from our nation’s past, you could only do that if somebody was going to give you $100 million,” he says. “Now we can take a great story like this on a very modest budget and we can get it into ­cinemas.”

Litvak says that Saving Lincoln is being released in more countries and hopes it will screen in Australia soon.

“Our international distributor has asked us to do another Jewish holiday comedy, so we are developing one with a Yom Kippur theme.”

Litvak is also working on a TV series based on The Accidental Talmudist, his blog that began as a small side venture and now has attracted a large audience.

“It was a little miracle how The Accidental Talmudist started,” says Litvak, who grew up in a Conservative Jewish family in New York, but after his bar mitzvah admits that he was not greatly inspired by religion.

“When my grandmother Magda died in 1997 I went to synagogue in her honour and something clicked. I felt connected to my ancestors and from that point became involved in Judaism again.”

Litvak visited a Jewish bookshop in Los Angeles in 2005 and saw volumes of the Talmud on the shelves.

“I did not know much about it or even if I was allowed to read it, so I decided to buy book one,” he explains.

“The salesman said, ‘You’re doing Daf Yomi’ and explained about the worldwide program where Jews read the Talmud a page each day for seven-and-a-half years. That day was ‘day one’.

“A lot of people start it but not so many finish it. I stayed with it against all odds and as I neared the end,

I thought I should write about it.

“I mentioned this to a friend at the Jewish Journal and he said, ‘You can write a blog,’ which was The Accidental Talmudist.

“Then I started a Facebook page to promote the blog. I never would have imagined that two years later I would have 60,000 followers.”

In August 2012, he attended the Siyum HaShas to mark the completion of the Daf Yomi cycle at MetLife Stadium in New Jersey where 93,000 Jews were celebrating.

“Reading the Talmud gave me the courage to publish these words in the hope they will touch someone’s soul.”

Limmud Oz is being held from June 7-9 at Monash Caulfield. Bookings: www.limmudoz.com.au.