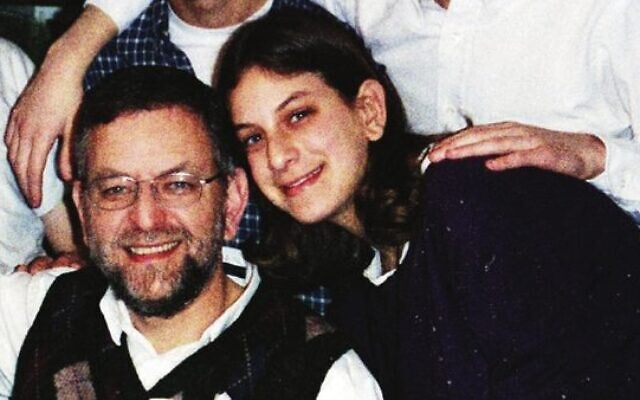 Arnold Roth with his daughter Malki.

ARNOLD and Frimet Roth have thrown their support behind draft legislation in the US Congress to compel Jordan to extradite Ahlam Tamimi, a terrorist involved in the bombing of a Jerusalem pizzeria that claimed the life of their Australian-born daughter Malki 21 years ago.

The Roths have publicly endorsed a bill by Congressman Greg Steube, a Florida Republican, which would commit Congress to recognising Jordan has an extradition treaty with the US. Malki, 15, was a US citizen through her American-born mother.

The couple’s endorsement coincided with a visit to Washington by Jordan’s King Abdullah II last Friday to meet with US President Joe Biden over a Jordanian bid to increase the Waqf presence on the Temple Mount after recent unrest, a move rejected by Israel, which has sovereign jurisdiction there.

Tamimi was charged with terrorist crimes by the US in 2013 and is on a list of the FBI’s most wanted terrorists. The bill proposes penalising Jordan if it does not extradite Tamimi. Said Steube, “Our US tax dollars will not continue to flow to a country harbouring a Hamas terrorist with American blood on her hands.”

Jordan maintains its extradition treaty with the US was never ratified, but the Roths cite documentation contradicting this.

Tamimi, one of the bombers of the Sbarro pizzeria in 2001 which killed 15 and injured 140, served part of a sentence in Israel but was extradited in a prisoner swap to free Israeli soldier Gilad Shalit from Hamas. She is now a Jordanian media personality and remains unrepentant about her role in the attack.

“Ahlam Tamimi’s obscene, ongoing freedom in Jordan has to be on the agenda of every meeting the Jordanian monarch is granted,” Arnold Roth said of King Abdullah II’s US visit.

Roth told The AJN this week that attempts to engage the Australian government through Prime Minister Scott Morrison and predecessor Malcolm Turnbull have so far yielded “frustratingly disappointing outcomes”. He added, “At this point, Frimet and I have stopped knocking on their doors.”