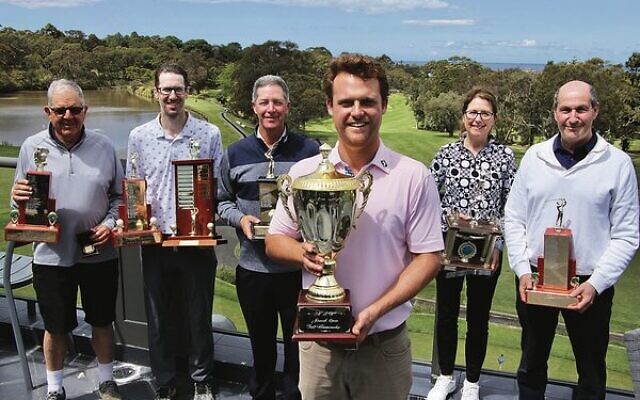 More than 120 golfers from 12 different clubs teed up, under clear skies, creating a great atmosphere, both on the course itself, and at the luncheon presentation that followed in the clubhouse.

In the men’s A Grade strokeplay, played across two rounds to determine the NSW men’s champion, Jason Rubenstein won by two shots, over runner-up Roy Vandersluis, to claim his second championship.

Rubenstein told The AJN, “I was leading by two shots after the first round, and the key to staying in front was focusing on staying composed throughout the last 18 holes, while also having fun, as this tournament is always enjoyable to play in, and is a wonderful annual event put on by Maccabi golf.”

I also had major spinal surgery only a few years ago, so it meant a lot to me to be able to come back here, and play really good golf again.”

The A Grade Stableford winner was Jason Odze, who finished with 40 points, and won on a countback from Barry Reichman.

Odze’s score proved to be the highest of the day, across all three grades, earning him the Brett Leviene Trophy.

It was Reichman’s ninth championship win.

The 2022 B Grade winner was Graham Shulman with 39 points, one point ahead of runner-up Steve Rosen.

In C grade, Gary Kam was the winner on 39 points, two points ahead of runner-up Jeremy Jacobs.

The 2022 women’s winner was Terry Katz, who beat runner-up Jody Drutman on a countback.

Both of their performances were all the more remarkable, as they had just returned from three days of golf in the Hunter Valley, where they were part of the winning NSW team in the Maccabi Queens Cup women’s tournament, versus Victoria.

Katz told The AJN, “We’d played a lot of golf in the lead-up, for sure, but it’s always a pleasure to play in this event at Monash, and I’d encourage all Jewish women golfers to play in this tournament next year, enjoy it, and support Maccabi golf.”

A special guest at the awards presentation was Denise Archie, who personally presented the matchplay knockout trophy – named in honour of her late father Eric Rosenberg – to 2021 winner Russel Lyons.

Rosenberg was a founding member of Maccabi NSW Golf.

The 2022 matchplay knockout competition is currently at its semi-final stage, with Craig Maltz set to play Ivan Kaye next, and Trevor Sidley to face Mark Sacks.