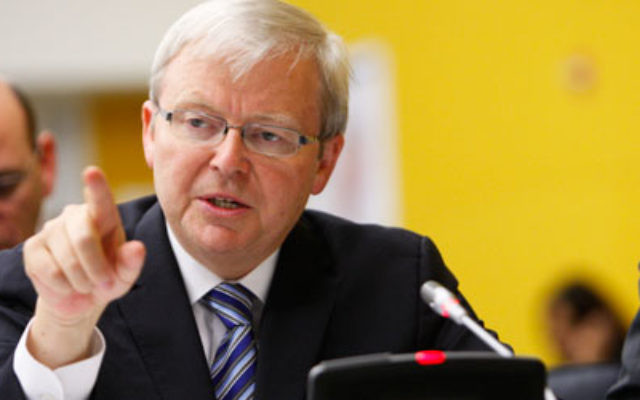 AUSTRALIAN Foreign Minister Kevin Rudd has joined Israel’s other allies in criticising the decision to build 1100 new homes in the Jerusalem suburb of Gilo and called for an immediate resumption of peace negotiations.

“The reality is that, in any future agreement, the Gilo neighborhood will be part of Jerusalem and part of the State of Israel – that has never been in dispute. We are talking about a neighbourhood with 40,000 inhabitants who have needs,” Ayalon said.

Speaking from Papua New Guinea, where he held discussions with the Prime Minister of the neighbouring island, Rudd indicated the Australian Government was “disappointed” with the Israeli Government’s move to permit construction.

He said the “decision to further expand settlements was counter-productive to the Middle East peace process”.

Rudd, who has visited Israel four times in the past 12 months and who spoke recently at the United Nations about the urgent need for peace between Israelis and Palestinians, urged the two parties to resume direct peace negotiations.

“This is an unwelcome development at such a sensitive time in the peace process and when the [Middle East] Quartet has just called on Israelis and Palestinians to refrain from provocative actions and resume direct negotiations,” Rudd said.

One of Israel’s closest European allies, Germany, has also expressed surprise at the Gilo decision.

German Chancellor Angela Merkel phoned Israeli Prime Minister Binyamin Netanyahu to tell him she “lacked any comprehension for the approval of new construction place for Gilo, just days after the Quartet declaration has been passed”.

She added that the plans “raised doubts over whether the Israeli Government was interested in the resumption of serious negotiations”.

In recent weeks, the Middle East Quartet has made urgent appeals to the Israelis and Palestinians to take up their positions at the negotiating table once again.

“While Israel has some concerns, it will raise them at the appropriate time,” the statement said. “Israel calls on the Palestinian Authority to do the same and to enter into direct negotiations without delay.”

Israel has sought to re-enter negotiations without any preconditions, but the Palestinian leadership made clear this week negotiations would not begin until Israel halts construction beyond the 1967 borders.