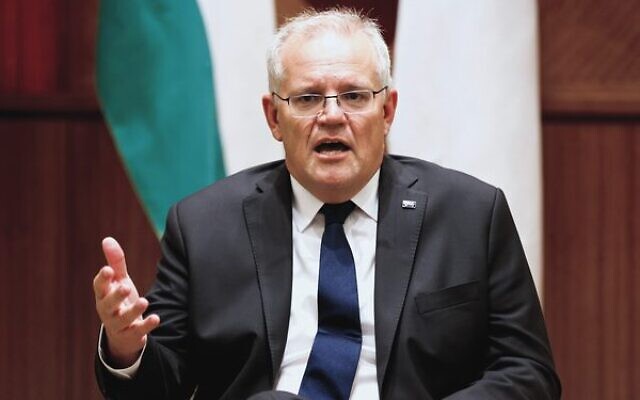 “I’ve never had an each-way bet on Israel,” Prime Minister Scott Morrison told The AJN on Wednesday morning after the federal governments’s decision last week to proscribe Hamas in its entirety.

“Hamas is a terrorist organisation. Are threats of violence and intimidation acceptable in order to extract some advantage or negotiating position? No, they’re not,” he insisted.

“There are some absolutes. And if you’re a terrorist organisation, we’ll have no truck with that.

Israeli Prime Minister Naftali Bennett called Morrison on Tuesday night, welcoming Australia’s stand. “He wanted to say ‘thank you’ to Australia and my government for the position we’ve taken on Hamas, and Hezbollah prior to that,” said Morrison.

“Other than the United States, Israel has no greater friend anywhere in the world. We will be always consistent about that.”

Responding to sentiments the full listing was a long time coming, the Prime Minister said, “We don’t do these things lightly. These have been under consideration for some time, and we’ve been working through a whole range of issues. Events change also over time, and advice changes as well. But … I’m really pleased that we’ve been able to get to that point.”

Home Affairs Minister Karen Andrews announced Hamas’s listing in full under the Criminal Code last Thursday. Australia joins nations including Israel, the US and UK in declaring the whole of Hamas, including its political wing, a terrorist organisation.

It follows a report released last year by the Parliamentary Joint Committee on Intelligence and Security (PJCIS) that found all wings operate “as a singular entity”.

The ban was also supported by ASIO director-general of security Mike Burgess.

“There is no place in Australia for their hateful ideologies,” said Andrews. “It is vital that our laws target not only terrorist acts and terrorists, but also the organisations that plan, finance and carry out these acts.”

Senator James Paterson, who chaired the PJCIS, welcomed the announcement, saying, “The Morrison government cannot and will not turn a blind eye to the campaign of violent terror against innocent civilians which is so evidently organised, financed and authorised by Hamas’s leadership.”

He added, “It also means that any Australian supporting Hamas could be committing a serious crime – a powerful deterrent to make Australia safer.”

“Anyone who has seen the murderous actions of Hamas up close, as I have, can have no doubt that the entirety of the organisation is engaged in terrorism,” he said.

Shadow attorney-general Mark Dreyfus declared Labor’s support for the listing, along with the proscription of the far-right group the National Socialist Order.

“No one in Australia should be assisting organisations which promote extremism and hate,” he said.

ZFA director of public affairs Bren Carlill added, “The idea that Australia could artificially differentiate between different parts of Hamas never really passed the pub test. This decision rights a wrong, and what’s really important is that it was bipartisan.”

Executive Council of Australian Jewry co-CEO Peter Wertheim said it is “especially heartening” that the PJCIS recommendation and the minister’s decision “were guided solely by the evidence”.

Australia/Israel & Jewish Affairs Council (AIJAC) executive director Colin Rubenstein noted, “Hamas is active in our region, with long-standing operations in Malaysia and a recently-foiled plot to kill Jews and Israelis in Philippines.”

The ZFA, ECAJ and AIJAC all gave evidence to the PJCIS last year.