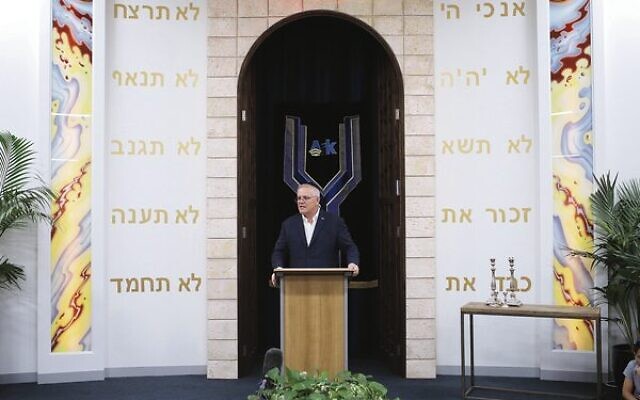 Written down by Rabbi Yehudah Hanasi  during the second century CE, the Mishnah is the basic compilation of what was until then the oral law of Torah.

Its content is almost solely legal; the fourth out of its six divisions is “Nezikin”, which literally translates as “damages” – the laws that might often end up in courts dealing with financial disputes. However at its conclusion is one tractate that stands out from all the others, “Pirkei Avot, Ethics of the Fathers”.

Here we find both history as well as sayings relating to morality in daily private and communal behaviour.

The result has been that it is a popular subject of study even by those not legally inclined. And over time we find that its content was formalised into a subject for study on the longer (northern hemisphere) summer Shabbat afternoons.

There are at least two variants to the custom to study Pirkei Avot on Shabbat afternoons. One custom is to do so from Pesach until Shavuot. In line with the principle that “Derech eretz kadma l’Torah” (Midrash Vayikra Rabbah 9:3) perhaps best translated as “Good character comes before Torah” – its study is an appropriate preparation for Kabbalat Hatorah on Shavuot. Its six chapters suit the six Shabbatot between Pesach and Shavuot. Also relevant to this custom is the fact that the tractate begins with “Moshe received the Torah at Sinai” and continues with the mesorah – the tradition of passing on of Torah teaching – until the time the tractate was written.

A second custom involves four cycles of study of the tractate throughout the northern hemisphere summer: Pesach until Shavuot, Shavuot until Tammuz 17 (the Three Weeks) and then two more cycles completed by Rosh Hashanah. The third cycle of that custom began last week and this coming Shabbat sees study of Chapter Two which contains the following Mishnah.

“Rabban Gamaliel the son of Rabbi Judah Hanasi said: ‘Be careful (in your dealings) with the ruling authorities for they do not befriend a person except for their own needs; they seem like friends when it is to their own interest, but they do not stand by a man in the hour of his distress’” (Avot 2:3).

Well may you ask, Isn’t this understandable? Particularly in Mishnaic Roman times there were clear grounds for fear of government. And as we know also Rabbi Shimon bar Yochai had to flee to his cave specifically for his stating that any good that arose from the actions of the Romans arose from their actions for selfish purposes.

Before I continue let me draw attention to another Mishnah from the following chapter.

“Rabbi Chanina the deputy High-Priest taught: ‘Pray for the welfare of the government, for were it not for the fear of it, men would swallow one another alive’” (Avot 3:2). So don’t interpret the first citation to imply total rabbinic negativity to government. And incidentally, not all commentators see Rabban Gamaliel’s reference to ruling authorities as specifically referring to government authorities but perhaps also to anyone in a position of power.

But my reason for highlighting this at this time is because of what I saw as an amazing event recorded a few days ago.

As is generally well known our former prime minister Scott Morrison is religiously involved in the Pentecostal Church. Apparently from time to time he gives the sermon in his church – Perth’s Victory Life Centre. And speaking on July 17 he actually warned the congregation that based on his experience in the upper echelons of power it would be a mistake to simply trust governments. As reported in by Lisa Visentin in The Age and Sydney Morning Herald his words encouraging the congregation to put their faith in God rather than the government included: “We trust in Him. We don’t trust in governments. We don’t trust in United Nations, thank goodness, We don’t trust in all of these things, fine as they might be and as important as the role that they play. Believe me, I’ve worked in it, and they are important. But as someone who’s been in it, if you are putting your faith in those things, like I put my faith in the Lord, you are making a mistake. Firstly, they are fallible. I’m so glad we have a bigger hope.”

Admittedly Prime Minister Anthony Albanese criticised his predecessor’s use of a “nonsense throwaway conspiracy line” about the United Nations in a church sermon, suggesting it was unhelpful as he tries to rebuild Australia’s international standing. But the fact remains that it is not just our sages of old who perceived realities that sadly have hardly changed.

To conclude this week’s column as we enter the Nine Days of Mourning let me just draw attention to another current issue. Shule-going travellers between Israel and Australia or other Diaspora centres since Pesach may have been puzzled when opening their chumashim for Kriyat HaTorah. What they heard was not what they expected; the parasha read in the Diaspora was one behind that read in Israel.

This situation that arose when the last day of Pesach in Israel was Friday while the eighth day in the Diaspora was Shabbat so that that Shabbat in the Diaspora had a festival reading rather than the parasha, is now ending.

This week Israeli shules will just read parashat Masei while Diaspora shules will double up Matot and Masei, bringing everyone into line.

May this unity that will first be apparent as we all read Devarim prior to the (deferred) fast of Tisha b’Av, serve as a precursor of the unity our sages taught was essential to redress the disunity that brought about the Destruction that we still mourn today. In the words of the verse recited at the end of a Shiva service, may all our mourning be turned to joy as “God will wipe the tears from all faces, for Hashem has spoken” (Isaiah 25:8).