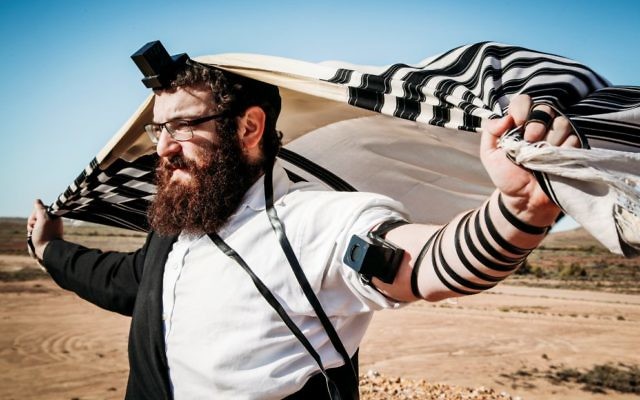 Rabbi Yossi Rodal prays in central Australia during a trip by Chabad of RARA which was filmed for a SBS documentary.

EACH year rabbis from Chabad of RARA (Rural and Regional Australia) head off the beaten track searching for ‘lost’ Jews who have settled in isolated places ranging from Alice Springs in the outback to one-pub towns on Queensland’s tropical coast.

Sharing the duties are Cairns-based Rabbi Ari Rubin and his wife Mushkie, whose territory covers north Queensland; and Melbourne-based director, Rabbi Yossi Rodal and his wife Malki, who look after the rest of Australia.

Whether shopping for kosher food, praying in the outback or in the centre of a small town, the rabbis ensure that they are visible in the hope that anyone Jewish will come forward.

They are also proactive, checking local phone directories and calling anyone with a Jewish-sounding surname – often with surprising results.

For more than 10 years, Melbourne filmmaker Danny Ben-Moshe has wanted to make a documentary about Chabad of RARA’s rabbis at work, but his idea never got off the ground.

However, when SBS announced a few years ago that it was planning a series of documentaries set around diverse communities titled Untold Australia, Ben-Moshe thought a film about Chabad of RARA rabbis could be a perfect fit.

Ben-Moshe’s idea was one of more than 100 pitches received by SBS for the latest Untold Australia series and fortunately it ended up being shortlisted.

After another selection process, Ben-Moshe, who runs Identity Films, was commissioned to make Outback Rabbis, one of the four documentaries in the series which premiered on SBS this month.

Location filming took place in August last year when Ben-Moshe and a crew that included a producer, cameraman, sound recordist and director of photography followed Rabbi Rubin and his family on a two-week trip from Cairns to Magnetic Island, and Rabbi Rodal and his family a two-week 3000-kilometre trip from Melbourne to Uluru.

“It is such a special story – I’ve always thought of it as a cross between The Frisco Kid and Priscilla Queen of the Desert,” said Ben-Moshe.

Much of Outback Rabbis is filmed as reality-style TV as the camera follows the rabbis questioning locals in small townships over whether they know any Jews.

In Mission Beach in Queensland Rabbi Rubin takes his quest into a pub, while in a supermarket in outback Coober Pedy Rabbi Rodal asks shoppers and the checkout lady.

“We were concerned that we may encounter some anti-Semitism along the way, but we didn’t during filming,” said Ben-Moshe. “For the most part people were very welcoming and hospitable.”

Ben-Moshe found filming in Central Australia to be gruelling because of the vast distances that they travelled.

“The film crew travelled in a convoy behind the mitzvah tank,” he said. “This was probably the hardest shoot that I have ever done in terms of covering territory to get the content that you need.”

The travelling rabbis caught up with Jews that they have met before who live in Alice Springs and Magnetic Island and welcome the personal contact.

Ben-Moshe, whose documentary films include Shalom Bollywood which was screened at last year’s Jewish International Film Festival and the award-winning 2014 film Code of Silence, is thrilled with Outback Rabbis.

“It’s upbeat and quirky and has lots of characters,” he said. “As a director there is always the pain of what you have to leave on the cutting-room floor and I would like to make a feature-length version to screen at international film festivals.”

SBS’s Untold Australia series started on May 16 with Lebanese Beauty Queens, followed by Outback Rabbis on May 23, Australia’s Forgotten Islands on May 30 and Behind the Blue Line on June 13. Screening time is 8.30pm.