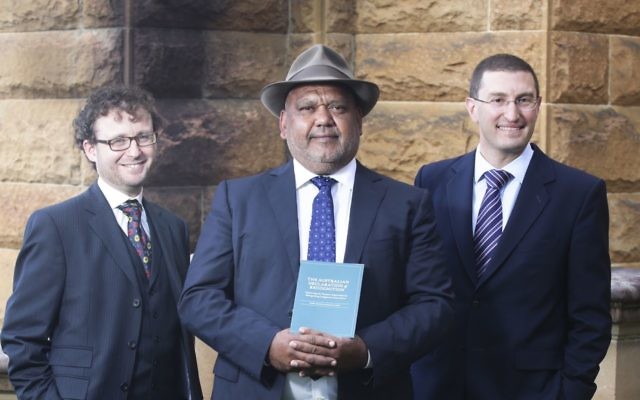 THE Pesach story has drawn two Jewish lawyers into the creative process behind Aboriginal leader Noel Pearson’s initiative for a specific declaration of the role of Indigenous Australians in the national story.

Pearson’s proposed package of constitutional reforms includes an Australian Declaration of Recognition (ADR) expressing Australians’ hopes for their country, including aspirations of the first Australians.

The prominent Indigenous advocate, who is on the Expert Panel on Constitutional Recognition of Indigenous Australians, and initially backed the panel’s push to amend the Constitution, now wants a compromise between supporters and opponents of that course.

Amending the Constitution with symbolic words of recognition has drawn flak from constitutional conservatives, who argue the nation’s foremost legal document is a risky place for creative expression.

But Pearson’s option for an ADR as a companion to the Constitution has gained traction, and Passover has been an influence.

At a seder at Australian Catholic University law academic Julian Leeser’s Melbourne home in 2013, he and Sydney legal colleague Damien Freeman, friends for some 20 years, were discussing Aboriginal rights and parallels in the Passover epic about repression and liberation.

“Being constitutional conservatives, we were concerned at some of the proposals for Indigenous recognition in the preamble,” Leeser told The AJN.

“The great effect of the Passover story isn’t that somewhere in a book no one reads the Exodus is told, but that it’s told repeatedly between generations,” he said. “People can repeat large slabs of the Passover seder from memory … we’ve survived [as Jews] to tell a story.”

Leeser believes “a set of Australian values around the idea of Indigenous recognition”, regularly recited at civic, religious and national events, and at school assemblies, would be “transformative”.

He described an ADR as “acknowledging Indigenous people in a way that would be far more meaningful than putting a couple of words in a preamble but also have none of the constitutional downsides”, that is, unintended legal consequences.

Contacting his Australian Catholic University vice-chancellor Greg Craven, Leeser was introduced to Pearson, at the time a strong backer of changing the Constitution. Discussions between Leeser and Freeman – who have a strong background in Indigenous affairs – with Pearson, who is a longstanding admirer of Jewish communal dynamics, led to the ADR concept.

Aside from the ADR, Pearson is proposing abolishing obscure state and Commonwealth powers in the Constitution and setting up a consultative body for Indigenous issues.

Leeser and Freeman have founded Uphold and Recognise, an organisation through which they will campaign for their model of reform.