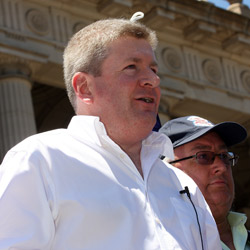 FOLLOWING hot on the heels of his parliamentary colleagues’ trip to Israel with the Australia Israel Cultural Exchange, Victorian senator Mitch Fifield has departed for the country.

The Shadow Parliamentary Secretary for Disabilities, Carers and the Voluntary Sector was awarded a scholarship to travel to Israel from the NAB Yachad Scholarship Fund.

Deputy Opposition Leader Julie Bishop, together with other MPs, is also visiting Israel this month as part of an Australia/Israel and Jewish Affairs Council trip.

Senator Fifield said his trip would primarily focus on matters relating to his portfolio. He will visit Israeli non-governmental organisations (NGOs) that provide help to people with disabilities, their families and their carers. He will also visit NGOs that work with youth at risk.

Senator Fifield has been a long-time supporter of the Jewish community. Earlier this year, he addressed an Israel solidarity rally in Melbourne. He was also one of two senators, who recently defended Israel in parliament.

He expressed support for efforts to release Gilad Shalit, an Israeli soldier who has been held hostage for more than three years.

Labor senator Michael Forshaw, the chair of the Joint Standing Committee on Foreign Affairs, Defence and Trade also spoke in support of Israel in the final sitting week of parliament before the winter break.

He rejected the idea — put forward by some pro-Palestinian groups — of a boycott against Israel. He also criticised the often-used comparison between Israel and apartheid South Africa.

“In my view, to suggest that the campaign to support Palestinian rights should be founded upon a boycott of Israel, using the terminology or the argument that Israel is an apartheid state is, as I said, an outrage,” Senator Forshaw said.

“There are rights enjoyed by Palestinians and Arab citizens in Israel that do no exist for the Jewish people in some of those surrounding countries.”