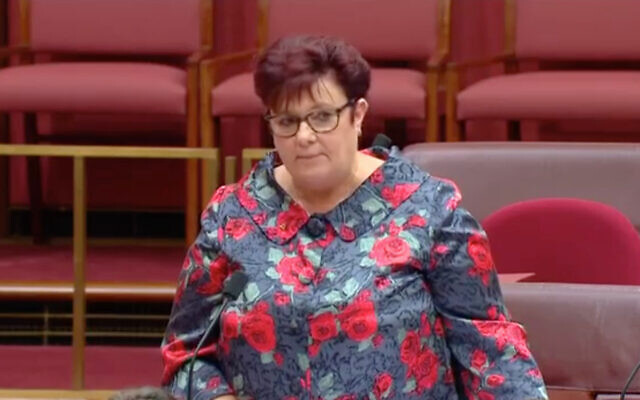 A LABOR Senator for Tasmania has come under fire from Australia’s Jewish roof body after claiming in Parliament that the “cynical use of the slur of antisemitism” is a “tool to silence critics of Israel for that state’s exhaustively documented human rights abuses against Palestinians”.

Anne Urquhart made the comment last month in response to a speech by Liberal National Senator for Queensland Paul Scarr, who called for unity against extremism.

“I believe, if we are to be successful in defeating extremism in this country, those of us who consider antisemitism, fascism and extremism of all types to be vile and unacceptable in our society need to come together,” he said.

Responding to Senator Urquhart’s assertion, Executive Council of Australian Jewry co-CEO Alex Ryvchin told The AJN the suggestion that Jews use claims of antisemitism for political purposes is “incredibly offensive”.

“This is a line straight from the Corbyn playbook that had brought disgrace and electoral ruin to … [the UK Labour] Party,” Ryvchin said.

“It is used as a way to prevent Jews from calling out racism directed at them and has the effect of enabling antisemitism, because whenever someone now makes an overtly antisemitic statement and is condemned for it, they can hide behind statements like Senator Urquhart’s and allege that the Jews are merely ‘crying antisemitism’ again.”

Urquhart did not respond to The AJN‘s enquiries.

Noting the definition “makes clear that while legitimate criticism of Israel similar to that levelled against any other country is perfectly reasonable and not antisemitic”, Burns added, “Charges of antisemitism can rightly come when it rises to holding Israel to an unfair double standard, a denial of the Jewish right to self-determination, or quite simply promotes falsehoods about the Jewish State.”

Among them were former Liberal MP Craig Kelly for comparing the Victorian government’s COVID lockdown to Nazi Germany, Nationals MP George Christensen for rewriting Martin Niemoller’s First They Came poem to be about Donald Trump and Craig Kelly, and Senator Alex Antic for making a speech about cultural Marxism, which is an antisemitic conspiracy theory.

“We need more leadership in this country and less of the sort of behaviour that flirts with the right-wing extremism that has no place in a modern Australia,” Burns lamented.