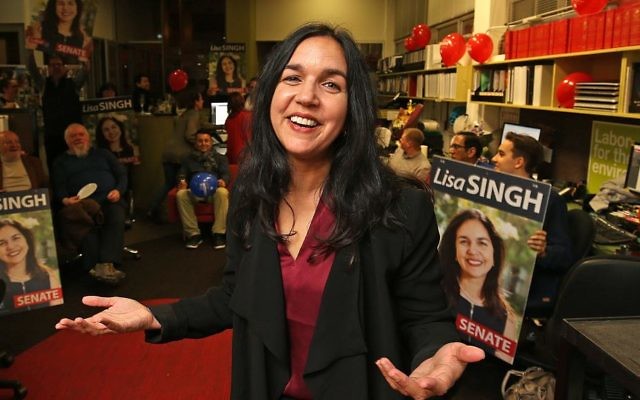 Senator Lisa Singh at her office in Hobart.

JEWISH groups have condemned a volley of accusations in Parliament by Senator Lisa Singh after her April visit to the West Bank and Israel.

In a June 13 Senate speech, the Tasmanian ALP senator claimed the Israeli–Palestinian conflict “began with a group of immigrants attempting to displace a local people”.

She lamented Palestinians’ “fear and intimidation of queuing for Israeli soldiers with big guns as they search cars and check papers”.

On the security barrier, Singh charged: “My take on this wall is that it is not for security, but for land appropriation … to ensure the unviability of a Palestinian state.”

And appearing to ignore often-stated Palestinian goals of seizing all of Israel, she claimed, “What I learnt from speaking to Palestinian people is that, in a way, borders are not as important as their human rights.”

Her comments were based on “the disgraceful falsehood” that Palestinians were displaced by Jewish newcomers, he said, when in fact, Jews “are indigenous to the Holy Land” and no Palestinian entity existed before the 1993 Oslo Accords.

Zionist Federation of Australia president Danny Lamm asked whether Singh visited Dalal Mughgrabi Square, named after a terrorist who murdered 38 Israelis, or Gaza, where people are used as human shields and armaments are kept in schools and mosques.

“Did Senator Singh spare a single moment to reflect on the lengths society must go to in order to defend its citizens from such a mindset?” he said. “If not, then perhaps she is only seeing a small fraction of the picture.”