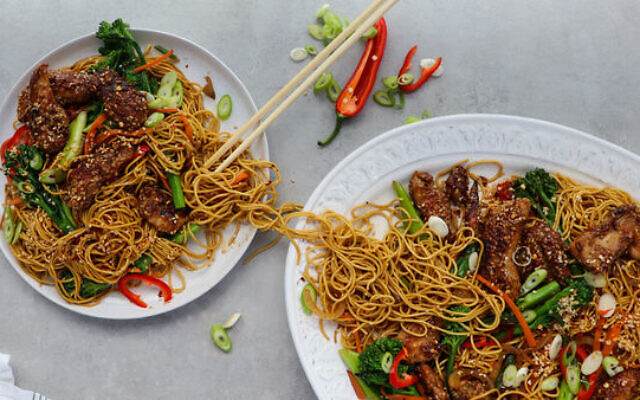 For the lo mein

Marinate the chicken in a bowl with the soy sauce, rice wine vinegar, and sesame oil.

Heat a large pot or deep frying pan on medium-high heat. Heat 1 Tbsp vegetable oil and add the broccolini to the pan. Spread the pieces out so they all touch the bottom. Allow them to lightly sear on one side, about 3 minutes, and turn them over to do the same on the other. Pour ¼ cup water into the pan and cover for a minute, to steam and slightly soften the broccoli. Season with a pinch of salt, remove from the pan while still bright green, and set aside for later.

Add 1 tsp vegetable oil to the pan, followed by the spring onions. Allow them to soften and become slightly golden, about 3 minutes. Remove from the pan and set aside with the broccoli.

To make the chicken

In a small mixing bowl, combine the flour, sesame seeds, a pinch of salt and pepper, and the chili powder. Remove any excess marinade from the chicken slices (reserve the marinade for later) and coat well in the flour mixture.

Heat 3 Tbsp vegetable oil in the same pan and fry the chicken for about 4 minutes on one side, until a dark golden crust has formed. Turn the pieces over and do the same on the other side. Transfer onto a plate.

If needed, add another Tbsp vegetable oil to the pan and sauté the onion until soft and slightly brown, about 5 minutes. Add the carrots and chili, and sauté for 2 minutes. Add ¼ cup water to the pan to help the carrots soften slightly and toss. Once the liquid has evaporated, set this mixture aside with the other vegetables for later.

Add the honey and chili flakes into the leftover chicken marinade. Pour this mixture into the pan and allow it to bubble and thicken into a syrup. Gently toss the chicken pieces in the mixture until they are coated well. Remove from pan and set aside.

To make the noodles

Bring a pot of water to the boil and cook the noodles for 2 minutes less than instructed.

Make the sauce for the noodles. Combine the soy sauces, rice wine vinegar, mirin, honey, and 1 Tbsp sesame oil and pour into the pan. Let it bubble a little to allow the alcohol flavour in the mirin to cook off, then add the onion and carrots, cooked broccoli, and spring onions. Toss in the sauce then add the noodles, mixing them thoroughly.

*To toast the sesame seeds, pour onto a small baking tray, place them in 180 degree C oven for 5-7 minutes, or until golden.

Recipe by Emanuelle Lee for The Nosher, JTA.