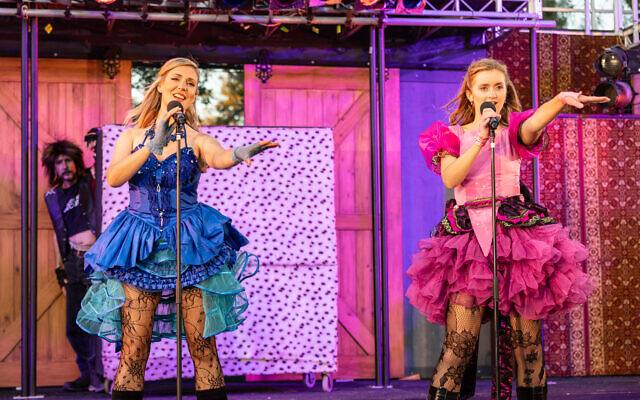 Anna Burgess (left) and Larissa Teale in Much Ado About Nothing at Melbourne’s Royal Botanic Gardens. Photography by Ben Fon.

The AJN reviews Shakespeare’s classic play Much Ado About Nothing, which has been turned into a musical comedy.

THE Australian Shakespeare Company’s summer outdoor production of Shakespeare’s Much Ado About Nothing in Melbourne’s Royal Botanic Gardens has given the classic play a musical makeover featuring energetic performances from two livewire bands.

The result is an entertaining production that one imagines the Bard would be pleased with.

Musical director Paul Norton – a veteran from 1980s bands The Runners, Wendy and the Rocketts and Steve Hoy and The Hoy Boys – has drawn on the original 16th century text to create ‘90s rock ‘n’ roll numbers mixed with soulful ballads to enhance the story set around the troubled romance between Beatrice (Anna Burgess) and Benedick (Nicholas Gell) and introducing a rivalry between Beatrice’s girl band and Don Pedro’s boy band.

The result is a musical treat laced with laughs for the audience in a two-hour show under the stars, sitting on chairs and picnic rugs on the grass.

Director Glenn Elston pioneered performances in the Royal Botanic Gardens in 1987 and today has a suite of shows suitable for children and adults being staged throughout summer.

Love is in the air for Beatrice and Benedick, who despite initial protests and the trickery of their friends end up falling for each other, while Hero (Larissa Teale) and Claudio (Alex Cooper) become starry-eyed lovers who are deceived by Don John (Kevin Hopkins).

Most of the cast have plenty of comic lines, but lovable roadies Dogberry (Madeleine Somers) and Verges (Tony Rive) shine as they milk their roles to the hilt.

With live music and a liberal dose of humour, there’s much to enjoy about this production of Much Ado About Nothing.

Australian Shakespeare Company’s Much Ado About Nothing is at the Royal Botanic Gardens, Melbourne, until February 4. Bookings: www.shakespeareaustralia.com.au