Sheezel, 18, officially became an AFL player when selected by the North Melbourne Kangaroos as the number three pick in the AFL draft, becoming the first ever Jewish top 10 draft pick, and the first to be drafted since 1999.

“There was so much going on after my name was called [as pick three], but the Kangaroos arranged a little function across the road just for me and [fellow Kangaroos draftee] George [Wardlaw], and our families, which was really special.

“And I got some cool videos sent to me from my footy mates at AJAX who were at [the clubhouse at] Albert Park, of their reactions to me getting drafted – it was so good to see that – they’ve been there throughout my journey.

“Now I’m just keen to go to the club [Kangaroos], and right from the start, try and build as many close connections as I can with all my new teammates, the coaching staff, and the fans.

“Then get to work and train really hard, to give myself the best opportunity to play AFL football as soon as I can, and help the club win more games and achieve success.”

Jason Wrobel – who coached Sheezel at AJAX first when he was a five-year-old Auskicker, and then his junior AJAX team from 2012 to 2016 with Sheezel’s dad, Dean – told The AJN, “Harry was a talented footballer with sublime skills right from day one, but that can only get you so far.

“The reason he has gone on to not only meet every next big challenge, but succeed with flying colours, is because of his excellent work ethic, his commitment to the cause, and his tremendous self-belief.

“He has a certain calmness about him, and has never been overawed by an occasion.”

Wrobel – who happens to be a lifelong Kangaroos supporter – added that Sheezel is a “tremendous role model”.

“A lot of our club’s juniors have seen Harry’s commitment, and I think his success will give them confidence to work towards whatever they want to achieve.”

“Football can be taken away from you at any time, so it’s all about being grateful, and giving it your all in every opportunity you get.” – Harry Sheezel

Wishing Sheezel every success in the AFL, Mount Scopus College principal Rabbi James Kennard said, “Through Harry’s own effort, he has combined his [footy] training with his school studies, and this tremendous achievement is a true testament to his dedication.”

The school’s head of sport, Rob Scholz, added, “Harry is a natural leader who sets high standards for himself and those around him – he thoroughly deserves the recognition and any successes that come his way.”

Described by the Kangaroos as “a game-changing prospect with an abundance of X-factor”, Sheezel has the ability to play in the forward pocket or the midfield, he can read the game like a book, and has a knack for scoring goals at key moments.

He got his start at AJAX juniors, playing 117 games for them and kicking 211 goals, earning three Best & Fairest awards along the way.

But the last 18 months has seen him reach new heights, from playing his first men’s footy game for AJAX at the age of 16, to playing key parts in championship wins for the Sandringham Dragons (2022 NAB League premiers) and Vic Metro (U18 boys’ national championship winners), while also being named in the forward pocket in the U18 boys’ All-Australian team.

He booted four goals for Sandringham in their NAB League grand final win, and kicked eight goals across four games for Vic Metro.

Sheezel told The AJN, “I always thought that I could maybe achieve making the AFL one day, but it was probably after a game last year down in Geelong, when I played for Vic Metro versus Vic Country, and I was pretty happy with how I played, that I think set me up, mentally, to give myself a good shot.”

He added, “It was also just consistency with putting in the hard work, over many years, like doing extra gym work, running, and touch sessions with the football.

“And just always making sure you don’t take anything for granted, because football can be taken away from you at any time, so it’s all about being grateful, and giving it your all in every opportunity you get.

“My school was also really great in allowing me to do only three VCE subjects this year, as I had footy training nearly every night, and I definitely felt their support in the lead-up to the draft.” 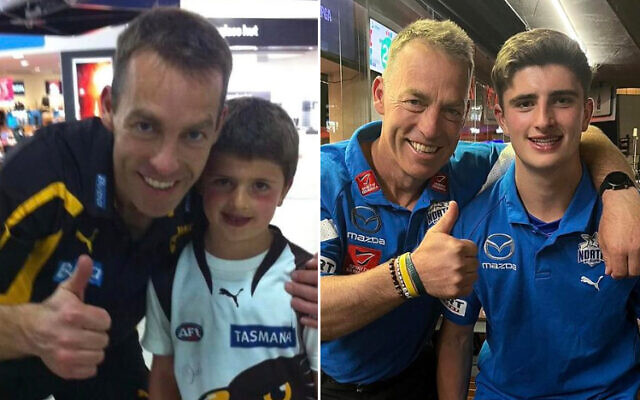 In a wonderful coincidence, Sheezel grew up as a passionate Hawthorn fan, and he still has a photo of him as a wide-eyed eight-year-old meeting four-time Hawthorn premiership-winning coach Alistair Clarkson, who is North Melbourne’s new head coach.

“Clarko presented me with my Kangaroos jersey on draft night, which was pretty amazing, and just said he is really glad to have me,” Sheezel said.

While he has so many happy memories from his footy with AJAX, he said, “Probably what stands out most would be my debut for the AJAX senior team on Anzac Day last year, against Fitzroy, when I got to play with my cousin [Toby] for the first time, and I was pretty happy with how I played too.” (He scored four goals.)

Sheezel said the message he wants to send most to Jewish kids now is that “no matter what sport they play, or actually in anything that they want to achieve, just have belief, and not think that because no one else in the community has done something before, that it can’t be achieved”.

“I’d encourage everyone to learn as much as they can, and give it their best shot, because I’m pretty happy with the way it has turned out, and I’m sure other kids have the capacity to do the same.”