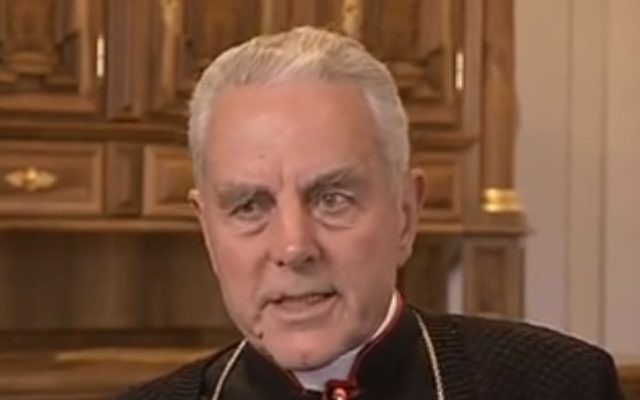 THE government has said it is considering requests to ban an anti-Semitic, Holocaust denying British bishop from entering Australia.

Richard Williamson (pictured) – who has described Jews as “enemies of Christ” who have contributed to “changes and corruption” in the Catholic Church, and who has also denied millions of Jews were murdered during the Shoah – is set to visit the country later this month.

His trip will include visits rural Victoria for church services.

In an interview shown by Swedish TV in 2009, Williamson stated: “I believe that the historical evidence is strongly against, is hugely against, six million Jews having been deliberately gassed in gas chambers as a deliberate policy of Adolf Hitler.”

He went on to deny the existence of gas chambers and cited evidence by Holocaust revisionists that only 200,000 to 300,000 Jews died in the concentration camps.

The bishop was one of four illicitly ordained by rogue priest Archbishop Marcel Lefebvre in 1988, resulting in excommunication by the Catholic Church. But the excommunications were controversially lifted by Pope Benedict XVI in 2009 on the same date that Sweden aired the TV interview in which Williamson denied the Holocaust. The former pontiff declared he had no prior knowledge of Williamson’s comments on the Shoah.

After his Holocaust remarks, Williamson was removed from a top post at a seminary in Argentina and was asked by the government to leave the country. In 2009, prosecutors in Germany, where Holocaust denial is outlawed, announced a criminal investigation into his statements and he was later found guilty of inciting racial hatred.

A Catholic with close ties to the Australian church told The AJN that Williamson “is part of what they call ‘the Resistance’. It is a schismatic group refusing to accept anything from Vatican II. They do not have anything to do with the ‘Newchurch’, which is mainstream Catholicism.”

“Pope Benedict suspended Williamson from his episcopal functions until he unequivocally and publicly repudiated his false assertions about the Holocaust. To our knowledge, he has not done so. We would hope that a person with such a record will, on character grounds, not be granted a visa into Australia,” he said.

Asked by The AJN if Williamson had been granted a visa to enter Australia, a spokesperson for Minister for Immigration and Border Protection Scott Morrison said, “This has been brought to the minister’s attention and he has asked for immediate advice on options available in relation to the matter.”