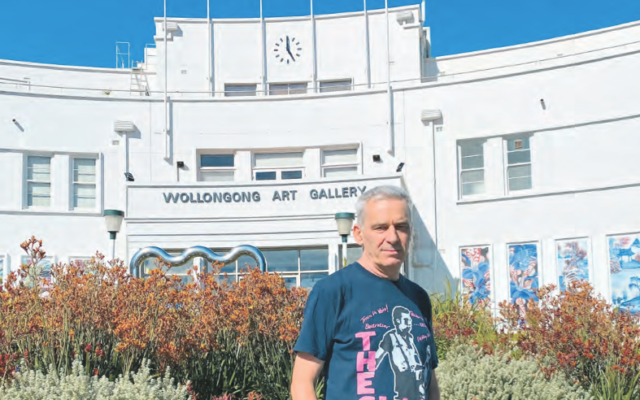 WOLLONGONG Lord Mayor Gordon Bradbery has vowed to work “meticulously and sensitively” alongside the NSW Jewish Board of Deputies (JBD) and Sydney Jewish Museum after shock Nazi revelations about local identity Bronius “Bob” Sredersas came to light this week.

It is alleged the well-known Lithuanian immigrant, who arrived in Wollongong in 1950 aged 39, was a Nazi collaborator associated specifically with the massacre of Lithuanian Jews during the Holocaust.

Sredersas had been celebrated by the City of Wollongong after he donated around 100 works of art to the Wollongong Art Gallery in 1976.

Known as a quiet and generous migrant, Sredersas worked in the city’s steelworks by day, but used his money to amass an extraordinary collection of Australian fine art. He donated his entire collection to the city of Wollongong before his death in 1982.

His donation came to be known as The Gift and there is a gallery named after him.

That will have to be amended if the evidence against Sredersas is verified, said Bradbery.

“There’s definitely plenty of evidence to suggest that he was complicit in war crimes,” he told The AJN. “We’ve got a collection of artworks that we need to identify and if they’re identified as being associated with a war criminal and war crimes, then we have to interpret that correctly and sensitively.”

Bradbery says the revelations have “thrown a blanket” over Sredersas’ past, but have also raised some uncomfortable questions.

“How many others might have been in our city, and came to our country, who had perpetrated war crimes?

“The art, they’re Australian works, but the other thing that concerned me was they might have been purchased with ill-gotten gains. We’ll suss that out as well.”

Bradbery has agreed to work with the JBD, who have called on the council to “do the right thing” and distance the Wollongong community from Sredersas.

“The allegations against Mr Sredersas are extremely serious and claim he was intimately involved in the Holocaust and the barbaric mass murder of millions of Jews and other minorities, people with a disability and political prisoners,” JBD CEO Darren Bark said.

“We call on Wollongong City Council to join with the Sydney Jewish Museum to investigate the veracity of these claims.”

With the assistance of the AFP, Bradbery and the council will collect the evidence gathered by former councillor Michael Samaras, who took it upon himself to dig into Sredersas’ past.

Samaras became suspicious when an article in 2018 described Sredersas as being a policeman for the Lithuanian government’s Department of Security. After retrieving Sredersas’ birth certificate from the Wollongong library, he went on to uncover evidence from Lithuania that alleges Sredersas served in the Nazi Party’s Schutzstaffel (SS) and their intelligence apparatus, the Sicherheitsdienst (SD).

If verified, it means Sredersas was involved in the deaths of 90 per cent of Lithuania’s Jewish community during the Holocaust.

Samaras presented his evidence to the Wollongong Council in January and says it was rebuffed – a concerning claim Bradbery says he is looking into – but Samaras says it’s just important for the truth to finally come out.

“I’m not a professional archivist, so it took me a lot of time to find the stuff. And where do you go looking for it? So I’ve had quite a journey as an amateur researcher,” he told The AJN.

“It is appalling that Sredersas became one of the most revered members of Wollongong’s arts community. The plaque in Bronius Sredersas’ honour should be ripped from the art gallery wall. There is enough information in the public arena to justify Wollongong Council acting – now,” he said.

The Sydney Jewish Museum, with its close relationships with historians who specialise in the Holocaust, will undertake further research if deemed necessary.