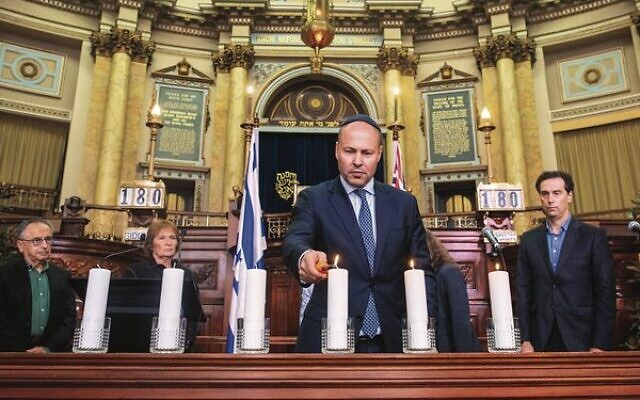 Describing MHC as “one of the most spectacular synagogues anywhere in the world”, Frydenberg recounted the greats who had been members, including Sir Zelman Cowen, Sir Isaac Isaacs, Sir Benjamin Benjamin, “and perhaps the greatest Australian of them all, Sir John Monash”.

“I look forward to this synagogue remaining an integral part of our community, with not only an active congregation, but also a place where non-Jewish members of our community can come and learn about our history, our culture, our traditions, and most importantly our values,” he said.

Recalling the tattoo on the arm of his great-aunt who survived Auschwitz, Frydenberg spoke of the 70th anniversary commemoration of the death camp’s 1945 liberation, which he had attended. Together with world leaders, “in the cold and in the dark, we walked along the railway lines past the watch towers to light a candle in memory of the dead”.

He emphasised the importance of Holocaust education, particularly in this time of rising antisemitism. “In a bipartisan way, we now have Holocaust education on our curricula. We will have a Holocaust memorial and centre and museum in every state and territory of Australia.”

Child survivor Nina Bassat, a former Executive Council of Australian Jewry president, reflected, “Numbers, so many numbers – my mind fails to understand them, my heart cannot open to them … We did not lose numbers, we lost people – young people, old people, children and babies … the lives not lived, the tears not shed, the laughter never shared … but for as long as we continue to remember, to speak, to teach, we have not lost them, for they continue to live in our collective memory.”

Emphasising the enormity of the Shoah, Melbourne Holocaust Museum CEO Jayne Josem said, “We get the slightest, and I emphasise, slightest hint of the atrocities of the Holocaust by … learning about the terror and murder committed by Russian forces in Ukraine.”