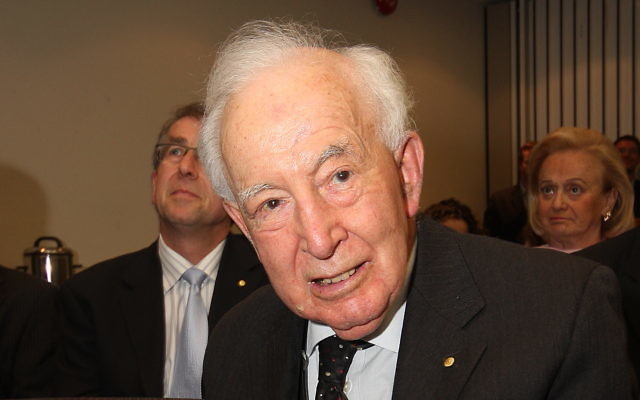 Tributes are pouring in for the venerated lawyer, academic and a giant of the Jewish community, with Prime Minister Julia Gillard this morning describing Sir Zelman as “one of our great statesmen”.

“We will remember him for his warmth, his humility, his integrity, his compassion and the great dignity he brought to public life.”

Sir Zelman was an internationally renowned academic by the time he was appointed to the office of the Governor General by then Prime Minister Malcolm Fraser, immediately following the sacking of Gough Whitlam in 1977. He held the post until 1982.

Speaking to ABC radio this morning, Fraser credited Sir Zelman with “healing” Australia, which was at the time gripped by crisis.

“There were obviously wounds to heal, and I think he did an absolutely wonderful job,” Fraser said.

“I really believe that all Australians owe Sir Zelman a great debt.”

“He was indeed a descendant of Aaron, loving peace, pursuing peace, loving people and for Australia encapsulating the spirit of conciliation,” Rabbi Cowen said.

Federal Member for Kooyong Josh Frydenberg was a friend of Sir Zelman’s for more than 20 years and used to meet with him for breakfast weekly.

“Sir Zelman was humane and decent, brilliant intellectually and with a deep commitment to serving the public,” Frydenberg said.

“He was much loved and respected by people from all walks of life and will be remembered as one of the greatest Australians who ever lived.”

In an interview with The AJN in 2009 on the occasion of his 90th birthday, Sir Zelman spoke of the importance of the Australian Jewish community.

“[The Jewish community] takes its place in the whole panorama of life and it is a community which has become increasingly aware of the part it can play in the wider Australian community,” he said in one of his last interviews.

“In a long and distinguished life of public service, Sir Zelman was a powerful influence for good in many fields. He will be remembered for serving his community and his country in the law, academia and in public office,” Lamm said.

“Sir Zelman positively touched the lives of many people with his support, encouragement and good humour. A gentle man, with a powerful intellect, he was a proud Australian and a proud Jew.  We wish long life to Sir Zelman’s widow, Anna, and their children.”

“Sir Zelman Cowen was a man of enormous stature in every walk of life,” Bassat told The AJN.

“Whatever role he filled, he did so with dignity and distinction. He is remembered with love and respect as an outstanding Governor General, as an inspiring  dean of law at the University of Melbourne, as a strong and effective Vice-Chancellor, and as a brilliant academic. He had a formidable intellect, and those of us who were fortunate enough to be taught by him, still remember his wonderful lectures.

“We have lost a great Australian Jew and a great man.  We offer our condolences to Lady Anna Cowen and the whole family.”

Sir Zelman was a Rhodes Scholar, served as dean of the Faculty of Law at Melbourne university and was made a Knight Grand Cross of the Royal Victorian Order by the Queen in 1980.

He died in his Toorak home after a long battle with Parkinson’s disease and is survived by his wife Lady Anna, four children, 16 grandchildren and six great grandchildren.

Sir Zelman will receive a state funeral on Tuesday.

Photo tribute from the AJN archives