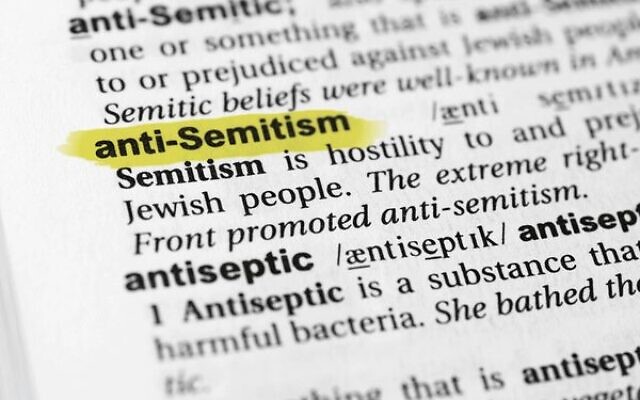 The PM pledged to adopt the definition in a video address last Wednesday night to the Malmö International Forum on Holocaust Remembrance and Combating Antisemitism.

It was immediately welcomed by the mainstream communal leadership and received bipartisan support in Canberra.

But the Greens, New Israel Fund Australia (NIF) and Australian Jewish Democratic Society (AJDS) have all spoken out against its adoption.

NIF executive director Liam Getreu said in a statement that the NIF “remain concerned about codification of the IHRA working definition”.

While he insisted the fight against antisemitism is “a high priority”, Getreu said the definition “is increasingly being used to conflate antisemitism and criticism of Israel”.

“Enshrining the definition into policy and law has not been supported by a wide range of groups, including leading mainstream Jewish-American organisations and even the definition’s lead drafter,” he said, in reference to US attorney Kenneth Stern, who in a 2019 Guardian op-ed wrote that he believed it had been “weaponised” by right-wing Jews to silence criticism of Israel.

But Zionist Federation of Australia (ZFA) president Jeremy Leibler said that neither his organisation nor any other Jewish communal body had called for the IHRA definition to be codified into law.

“Any suggestion that the definition can or will be used to shut down criticism of Israel is simply false,” he said.

“Any Jewish organisation that finds itself in the company of APAN [Australia Palestine Advocacy Network] and AJDS calling on the government not to adopt an internationally recognised definition of antisemitism that has been adopted by governments, political parties and universities all around the world, including Jeremy Corbyn’s Labour party, should engage in some serious self-reflection,” said Leibler.

He added that the statements in opposition are “completely tone deaf and a gross insult to Jewish students and their representative body, AUJS, who have asked for the adoption of this definition on Australian campuses.”

Australia Reform Zionist Association president Helen Shardey also welcomed the adoption, saying, “There are those in the Progressive movement who support much of the work of the New Israel Fund, but not their position on this all-important matter.”

Meanwhile, despite Opposition Leader Anthony Albanese and shadow foreign minister Penny Wong showcasing their support for the definition, the Greens told The AJN that they do not support its adoption and will not be taking on the definition as a party.

Leader Adam Bandt said the party agrees with Jewish organisations that have “warned against the consequences of codifying the definition”.

While he said the Greens are “particularly concerned by the resurgence of antisemitism seen across the world”, he added the party agrees with the AJDS’ Harold Zwier, who opined in August that the energy that has gone into formulating competing definitions “would be better directed to actually fighting antisemitism and racism”.

In response to the Greens, Labor Member for Macnamara Josh Burns said, “Combating antisemitism should unite all political parties, but sadly it does not.

“We saw the dangers of Jeremy Corbyn resisting the IHRA definition and it is alarming the Greens are choosing to fight this battle again,” he added, arguing that “the IHRA definition is explicit; criticism of Israel, similar to criticism levelled against other countries, cannot be regarded as antisemitism.”

AUJS president Gabrielle Agosin and public affairs director Gabrielle Stricker-Phelps said they had seen a “spike in antisemitic rhetoric on campus” in 2021.

“When our students have sought to report antisemitic instances in a university context, they have often felt frustrated and unheard,” they said, attributing much of this inaction to a lack of understanding of modern day antisemitism.

They said they hope “this leads the way for our universities to adopt [the] IHRA [definition] as a guiding principle and an interpretative tool to better support our students facing antisemitism”.

“We want free speech to flourish on our campuses, just not at the expense of our students.”

Zwier, who opposes the definition’s adoption, concerned that it gives those who believe “any criticism of Israel is a manifestation of antisemitism” an “opportunity to frame criticism of Israel as being antisemitic”, told The AJN, “If AUJS believe that IHRA is a useful tool for the universities then we have no argument with that.”

He added, “We are firmly opposed to antisemitism and support the fight against it.”