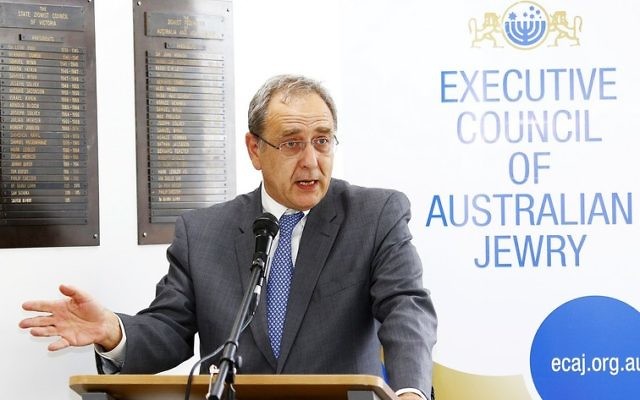 IN an unprecedented move, Israel’s new ambassador to Australia Mark Sofer has urged communal organisations to consult with the embassy before releasing public statements on issues concerning the Jewish State.

It came after the recently formed right-wing Australian Jewish Association (AJA) criticised the government on Monday for abstaining on an anti-Israel motion at the United Nations, decrying the abstention as “profoundly disappointing … cowardly and unprincipled”.

However, on Monday night, while addressing Sydney communal leaders, Sofer said that such statements “may not be entirely helpful” and could have repercussions.

The motion, put forward at the end of each year at the UN, states that “any actions by Israel, the occupying power, to impose its laws, jurisdiction and administration on the Holy City of Jerusalem were illegal and therefore null and void”.

“I just want to put this in perspective,” Sofer said of the UN resolution, “It is not something that happened this year for the first time.”

In fact, under the Rudd government in 2011 and 2012, Australia actually voted for the resolution. Between 2004 and 2010, it had abstained, a policy since readopted under Julie Bishop as Foreign Minister.

Urging communal bodies not to issue statements without consultation with the embassy, Sofer said, “I think that we need to have more unity of purpose and unity of direction … because sometimes there will be repercussions that we will have to deal with later.”

Stressing “there is no daylight between Israel and the Jewish community of Australia” he added, “Anyone that wishes to talk to us about voting or anything with the State of Israel, please feel free to talk to us. We need to tackle it together.”

In Federal Parliament, meanwhile, MP Michael Danby officially raised the issue of Australia’s decision to abstain from the vote when he contacted Foreign Minister Julie Bishop this week.

He asked if there was a vote concerning the city of Jerusalem on November 30 in the UN, if the resolution referred to the Temple Mount only by its Islamic name, the Haram al Sharif, and if Canada and the United States voted against the resolution, while Australia abstained.

“If Australia abstained from voting, how can this be justified given Australia’s previously announced criticism of UNESCO for using only Islamic names for holy sites in Jerusalem, which the Government said ‘could be seen as an attempt to alter the status quo at these Jewish and Islamic holy sites’,” Danby asked.

Read our exclusive interview with the Ambassador in this week’s AJN.