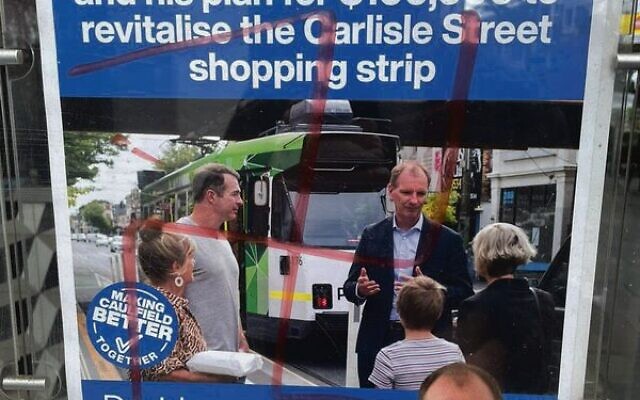 Member for Caulfield and deputy Liberal leader David Southwick said he refused to be intimidated after his campaign material was vandalised with antisemitic graffiti last week.

The posters that were defaced with swastikas were located on Carlisle Street in Balaclava. Businesses displaying Southwick’s posters were also vandalised with the Nazi symbol.

In a statement shared to Facebook, Southwick said, “Hate has no place in our society and this ignorant act has not intimidated me. Instead, it’s only proven why my years-long fight against this vile symbol is so important.

“I fought hard to spearhead laws to ban the Nazi swastika in Victoria as a critical step, against not just antisemitism, but all forms of intolerance.

“The passing of these laws with bipartisan support is one of my proudest achievements during my time representing our outstanding local community.”

Southwick said he went to St Kilda police station to file a report, “In the hope that these appalling individuals will be found and forced to face consequences for their actions.”

But he said that the state government’s six-month delay in implementing the swastika ban “means that they … will likely get off scot-free”.

“It’s yet another reminder of why we need swift, decisive action against hatred and why these laws should be in force today,” Southwick said.

President of the Jewish Community Council of Victoria (JCCV) Daniel Aghion said that the vandalism act is “offensive”.

“It says nothing about the candidate and everything about the stupidity of the person who applied it. It is not a permissible form of political speech,” Aghion said.

He added that the JCCV “looks forward to the forthcoming commencement of the legislation to ban the public display of Nazi swastikas in December”.

“All candidates must be extended the right to campaign in a safe environment without fear of hate or vilification,” he said.