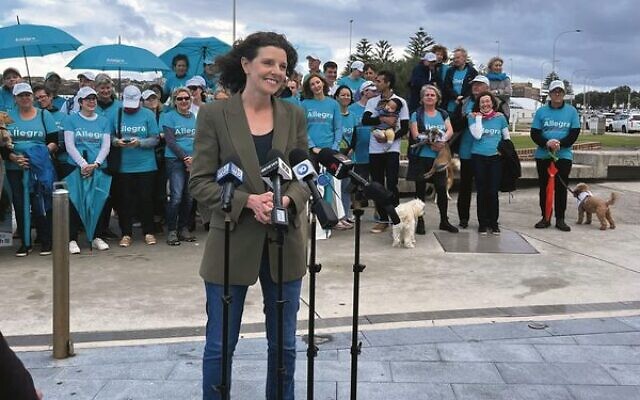 INCOMING Wentworth MP Allegra Spender said on Monday she is ready to provide “true representation” for residents in the electorate, including its Jewish population, pledging “my door is always open”.

Earlier, sitting Liberal MP Dave Sharma phoned Spender to concede defeat and congratulate her, when she had a 54.3 per cent to 45.7 per cent lead after preferences, with 70 per cent of votes counted.

Spender told The AJN her victory “is only just starting to sink in”.

“It’s really overwhelming, a huge honour, and a responsibility that I take very seriously.

“It’s about providing true representation for the voters of Wentworth, and turning that into action – that’s what people were telling me they wanted.”

Describing Sharma as a good person who is well liked, Spender believes the election outcome in Wentworth was not a reflection on him, but rather “the Liberal party slipping away from its traditional [centre-right] base”, and voters seeing the Coalition’s climate change policies as being based “more on ideology than on the science”.

“The legacy of this election is that the community wants the climate wars to stop, and for strong action to be taken on climate change.

“The business sector also wants that, so I will be working to hold the new Labor government to account on that, and that it should be going further.”

Among her other key priorities will be “to advocate strongly for the establishment of a federal ICAC, for the rights of refugees, and for Australia to become a clean energy superpower”, adding, “There’s a lot we can learn as a country from Israel – a world leader in innovation.”

Spender said part of her role as Wentworth MP will be to represent the Jewish community, focus on extending funding for communal organisations through the Safer Communities Fund, and establish “open dialogue”.

“Jewish communal leaders have contacted me to congratulate me, and I feel very grateful for their support, and I’d say to them, and to all members of the Jewish community, that my door is always open.”

She also thanked her Jewish volunteers, and expressed gratitude for former Wentworth Independent MP Kerryn Phelps “for her amazing support, and for being a source of inspiration not only for me, but I think for all the elected inner Sydney independents”.

“I spoke to Kerryn before I started to run for Wentworth, and she and her wife, Jacqui [Stricker-Phelps] – who was my sixth grade teacher – have been so supportive.”