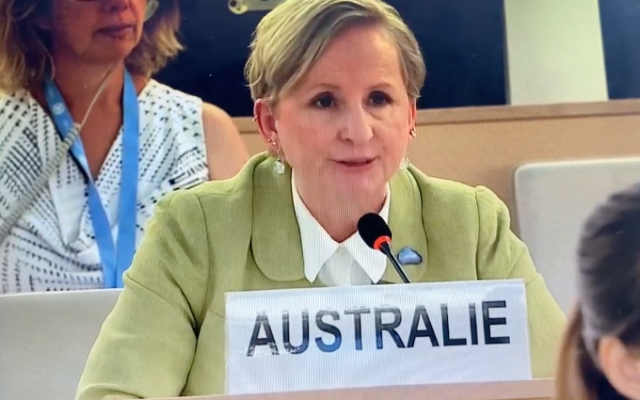 Australia has criticised the United Nations Human Rights Council (UNHRC) for its one-sided obsession with Israel.

While not one of the 22 nations to sign a statement rebuking the council this week in light of its skewed Commission of Inquiry report on Israel, in the UNHRC chamber last night (AEST), Australian ambassador to the UN in Geneva Amanda Gorely said the UNHRC “brings a disproportionate scrutiny to Israel”.

“We do not support the proposition that Israel is the only country that is a permanent item on the HRC agenda, which is why Australia does not and will not engage in Item 7 of the Council’s debate and why we retain our fundamental concerns about the nature of the Commission of Inquiry. Australia’s guiding principle will be advancing the cause for peace. Viewing any conflict from one perspective will not achieve that goal,” she said.

ECAJ co-CEO Peter Wertheim noted that the differences between Australia’s statement and the joint statement are “of nuance rather than of substance”.

“This has been the first real foreign policy test of the new government on an Israel-related issue and it reflects more continuity than difference in Australia’s approach,” he said.

“The government has maintained the bipartisan consensus that Israel should be treated like all other countries. We also welcome the government’s expression of its fundamental concerns with the Commission of Inquiry,” he said.

President of Zionism Victoria Yossi Goldfarb said, “That the Israeli-Palestinian conflict is the only global situation deemed worthy of a permanent commission of inquiry already highlights the UN’s prejudiced view of Israel. But this is further underlined by the report’s findings which focus almost entirely on allegations of Israel while skimming over the crimes perpetrated by Hamas.

“Amid speeches that were overwhelmingly hostile to Israel, we are grateful to the new government for speaking out against the UNHRC’s blatant bias and for upholding Australia’s bipartisan support of the Jewish State both domestically and on the international stage.”