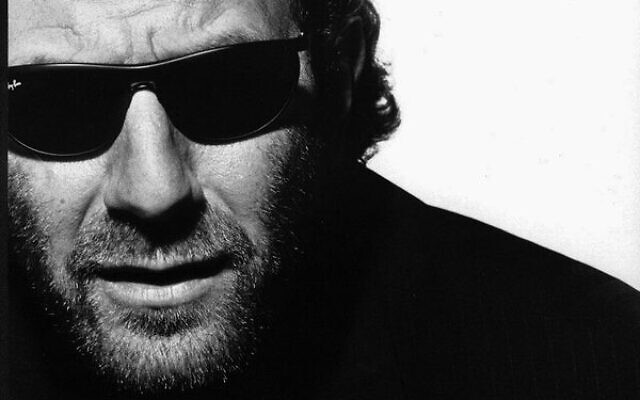 As Austen Tayshus, Sandy Gutman is known for his love/hate relationship with the audience. He relishes the opportunity to taunt those in front of him and never shies away from pushing the boundaries. It has been this way for more than four decades. Gutman unsettles his audience and loves to make them feel uncomfortable. He “deals in chutzpah”.

The comedian who rose to fame in 1983 with the comedy hit Australiana loves being on the road, and loves improvising his shows. For this reason, no show is ever the same. This also means that Gutman must be incredibly skilled at reading a room. He knows he’ll upset some people, and he’s ok with that. As he says in his new documentary, Skin in the Game, “If there is no one left at the end of the show, then it was a good show.”

Skin in the Game premiered on Fox Docos and is now streaming On Demand.

Gutman funded the project himself.

“I’ve achieved a lot of things, a lot of things that people don’t know about, including movies and television shows,” Gutman told The AJN. “So I put a team together.”

Peter Cox directed the documentary and John Scott edited it. “He cut Roxanne and News Front, and he’s done about 60 features. He’s one of the best editors in the world,” Gutman raved.

The documentary covers all the aspects of the comedian’s career – his work, his craft, his fears, how he started, life on the road, the impossible venues, and the inherent dangers. And Gutman shares how and why he does it all.

“[The film] is about the mechanics of this job as well as about telling people what goes through the mind of a comedian,” he explained.

Gutman said before the documentary aired on Foxtel, he received hundreds of phone calls from people all around the world wishing him luck.

Already, it has received an overwhelmingly positive response.

As Gutman explained, stand-up comedy can be a confusing space, often he doesn’t know what’s going to happen when he gets on stage.

“Even for people who know my career, there are things that they would not have understood, because a lot of people don’t really get what I’m on about,” he said. “This explains that to people.”

Gutman, never one for the comfortable life or the average day job, is always happy to step out of his comfort zone. And that’s exactly what the documentary shows – Austen Tayshus on the road, doing his thing, pushing hard to make a living all over Australia.

Austen Tayshus: Skin in the Game is available to watch On Demand on Foxtel and on Fox Docos