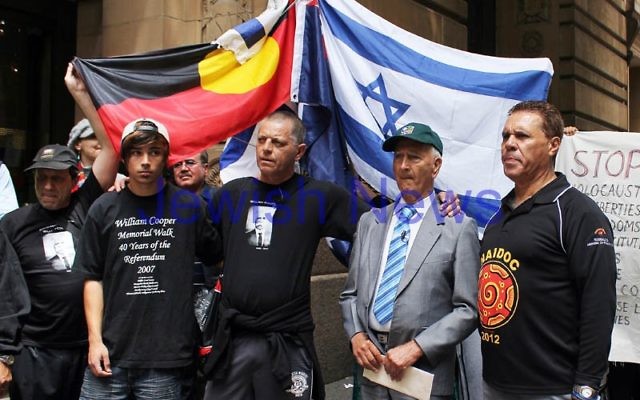 Thursday night was a watershed in Australian Jewish and Aboriginal relations. Genocide Perspectives V was launched by Tanya Plibersek, Geoffrey Robertson QC and Mark Tedeschi at the Sydney Jewish Museum in Sydney.

The collection of writings was a tribute to Professor Colin Tatz’s lifetime of work in Aboriginal history and Genocide studies.

The packed event offered a welcome opportunity to reflect on his significant contributions to the community and in academia.

After hearing Tedeschi describe the Myall Creek Massacre court proceedings as a “War Crimes trial”, Tanya Plibersek posed the question “Why has Australia found it so hard to acknowledge the genocide in its own history?”

The challenge is made even harder for Jewish Australians because the painful memories of the Holocaust still resonate and make us sensitive to comparisons.

However, it seems we have come a long way since 1985 when a young academic, Tony Barta, was removed from a stage at the Hakoah Club for suggesting that Sydney and Melbourne were named after “civilised gentlemen” – but founded on genocide.

An opinion that caused an uproar then appears less confrontational in the 30 years that have passed.

In that time, we have learned much more about Aboriginal massacres and the Stolen Generations.

Tony Barta’s restoration from the “Hakoah Club” stage to a contributor in a collection of writings published in honour of Tatz is further evidence of a change in our community.

At the book launch, there was general acceptance and even acclamation when Geoffrey Robertson QC stated that the historical treatment of Australian Aboriginal peoples met the modern definition of genocide.

There was a warm and generous response to Clarence Slockee, who acknowledged the traditional owners of the land and spoke about Aboriginal culture and history.

The presentation by John Maynard, a Worimi man and Chair of Aboriginal History at the University of Newcastle, who spoke about his academic research on the language of genocide in historical documents and the work of early Aboriginal activists including his own grandfather, Fred Maynard, was openly welcomed.

From their responses, the mostly Jewish audience acknowledged that recognising the genocide of the Aboriginal inhabitants of Australia does not diminish the horror of the Holocaust.

The event demonstrated that we have reached a watershed in the Jewish community’s understanding of the history of the treatment of Aboriginal peoples.

We are now ready to confront the truth that our wealth as a nation is based on the theft of Aboriginal Land, the murder of Aboriginal people, and the destruction of Aboriginal families, nations and cultures.

Without an acceptance of that truth, there can be no reconciliation.

It is hard to believe that the academic discipline of genocide studies is scarcely 30 years old. Colin Tatz has been at the forefront of that work.
Having spent a lifetime teaching, Tatz quotes Elie Wiesel, who, when asked what anyone could do about the Holocaust replied, “One must teach and teach again.”

In his essay, Tatz writes, “Teaching, of course, will not prevent genocide, but it will lay bare the essence of that behaviour.”

Tatz must be proud of the work that the Sydney Jewish Museum is doing in training Australian teachers, not only about the Holocaust and the Australian Genocide, but about the contemporary genocides in Armenia, Cambodia, Bosnia, Rwanda, Burma and lately by ISIS in Syria and Iraq.

When we say, “never again” to the Holocaust, we make a moral judgment about the German nation.

We don’t accept the claim that they didn’t know. Many did know, and those who didn’t, should have.

More importantly German people should have acted. Likewise, we have a duty to learn from Jewish history, to see injustice and to support the oppressed.

Thanks to the work of scholars like Colin Tatz and the work of lawyers like Ron Castan, in 1992 in the Mabo Case, the High Court was able to make a judicial statement that “Aborigines were dispossessed of their land parcel by parcel, to make way for expanding colonial settlement.

“Their dispossession underwrote the development of the nation” and Justices William Deane and Mary Gaudron even referred to our “national legacy of unutterable shame”.

The late Ron Castan summarised it well when he commented on what motivated his legal work for Aboriginal people: “What was the meaning of my determination to do my part never to permit a future destruction of the Jewish people, if I just stood by and participated in the bounty and opportunity of the Australian nation?

“What would that mean without doing something to expose and expunge the legal lie which lay at the foundation of the dispossession, disempowerment and attempted destruction of an oppressed group of fellow Australians?”

We should recognise that Aboriginal people have never received proper justice for the stolen land, lives and wages, for the police brutality, for the massacres and so much more.

Many Aboriginal people still live in abject poverty and are subjected to the same police brutality.

Sadly, more children have been removed from Aboriginal families since Kevin Rudd’s apology than during the stolen generation.

On any construction that meets the definition of genocide.

Mazal tov to the Australian Institute for Holocaust and Genocide Studies for celebrating Professor Tatz’s stellar career and giving us all the opportunity to learn and begin the journey to healing.

GEORGE NEWHOUSE is a human rights lawyer and a director of Yazda Australia Limited and the National Justice Project.