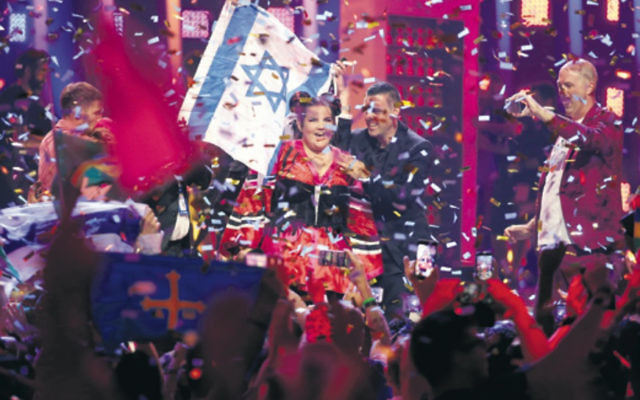 WHO knew that when Israel won the right to host Eurovision 2019, it would ignite controversy in Australia?

Israel will host this year’s extravaganza after Netta Barzilai won the 2018 contest with Toy – a salute to the #MeToo movement, punctuated by clucks and trills.

To be held in May, the contest is expected to attract 10,000 tourists, with Tel Aviv establishing a 2,000-person “tent city” and many visitors staying on for the city’s Pride Parade.

Australia’s entrant will be decided on the Gold Coast this weekend, with 700 songs submitted and the winner to be selected by the public and a jury.

At the same time, Boycott, Divestment and Sanctions Australia will set up shop nearby, demanding that SBS Television boycott Eurovision because it’s being held in Israel and joining thousands of overseas MPs, artists and private individuals also calling for a boycott.

Numerous Australian artists have joined the campaign, while BDS Australia staged a protest outside SBS, pontificating that it has a “fundamental problem with Eurovision going ahead in the midst of the catastrophe in Gaza”.

It issued a leaflet carrying the SBS logo and launched a petition stating “Eurovision should not be used to ‘artwash’ the Israeli government’s apartheid policies. Eurovision’s reputation will be forever tarnished by its association with the Israeli government. Just like the campaign to end apartheid in South Africa in the 1980s, international solidarity is vital.”

To its credit, SBS responded quickly and definitively. “SBS respects the right for people to express their views and we acknowledge the concerns raised by those opposed to the contest being held in Israel,” it said.

“SBS has been proudly broadcasting Eurovision for 35 years and we will continue to do so because of the spirit of the event in bringing people and cultures together in a celebration of diversity and inclusion through music.” It threatened to sue the protesters for appropriating its logo.

The heat and dust will escalate in coming weeks. Protesting voices abroad include 23,000 Icelanders petitioning their broadcaster to boycott the event; Irish members of the European Parliament, Portuguese artists and Sweden’s Left Party urging a boycott; London’s Guardian publishing a letter with 141 signatures; English protesters picketing a Netta Barzilai concert; and French protesters disrupting her appearance on French TV during “Destination Eurovision”, which selects France’s contestant.

Protesters jumped on stage but were removed by security within 30 seconds. BDS France claimed credit for the stunt with the hashtags #DestinationApartheid and #BoycottEurovision2019.

Then there are the principled voices, notably Canadian Prime Minister Justin Trudeau, who blasted BDS during a historic apology for Canada’s refusal to admit Jews fleeing the Holocaust, infamously sending the MS St Louis, carrying 907 German Jews, back to Europe, where over 250 perished.

“Of all the Allied countries, Canada would admit the fewest number of Jews … far fewer than the UK and significantly fewer per capita than the US,” Trudeau said. “Of those it let in, 7000 were labelled prisoners of war and unjustly imprisoned alongside Nazis. As far as Jews were concerned, even none was too many.

“Hitler tested the world’s resolve … as country after country proved indifferent to the plight of Jewish refugees. He watched as we … denied them entry. He challenged the courage of our leaders and the empathy of those who elected them. With every pogrom he tested our humanity. Hitler’s test is one the Canadian government failed miserably.

“Antisemitism has manifested itself not just in targeting individuals, but Israel,” he added, citing students who “feel unwelcome in some of our campuses because of BDS-related intimidation … I condemn the BDS movement. It is impossible to ignore the injustices still facing Jews. Seventeen per cent of hate crimes in Canada target Jewish people, far higher per capita than any other group. Holocaust deniers still exist. Antisemitism is still far too present. Jewish institutions are vandalised. Out of the entire community of nations, it is Israel whose right to exist is most widely and wrongly questioned.

“It is my hope that by issuing this long-overdue apology, we shine a light on this painful chapter of our history. It is our hope that this apology will cement Canada’s commitment to stand with the Jewish community here and around the world in the fight against antisemitism. More than 70 years ago, Canada turned its back on them. Today Canadians pledged, now and forever, never again.”

First held in 1956 to unite war-ravaged Europe, Israel and Australia are the only non-European nations in Eurovision. This year’s theme is Dare to Dream. Is it unrealistic to dream that the unity aspired to in 1956 will one day extend to all nations? That the hypocrisy in singling out the world’s only Jewish state for boycott while ignoring some of the most egregious human rights abusers – who also participate in Eurovision – will one day be rendered obsolete?

In the meantime, SBS is to be applauded for its principled stand. Eurovision is about music; keep politics out of it.

VIC ALHADEFF is CEO of the NSW Jewish Board of Deputies