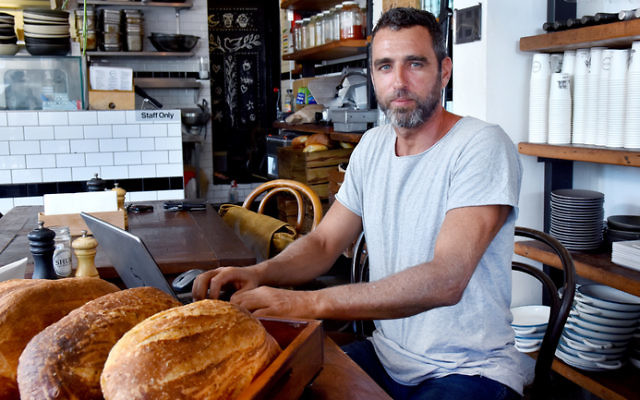 Co-owner of Shuk Erez Beker claims he is being discriminated against by the KA. Photo: Noel Kessel

THE Kashrut Authority (KA) has defended its decision to ban Shuk from using Our Big Kitchen (OBK), in the face of claims its policy is discriminatory.

The cafe and bakery has prepared food for kosher functions and pop-up events at the site in the past without any issue.

However, it recently started selling bread with a hechsher provided by KA’s rival Community Kashrut, and has now been told it can no longer use the community facility to cook for functions.

OBK regularly hosts people of all faiths, including prisoners on parole, but founder Rabbi Dovid Slavin said he was told his hechsher would be at risk if he allowed Shuk to use the kitchen. “This is the first time that OBK has had to refuse anyone entry,” Rabbi Slavin told The AJN. “This is a very painful situation to be in. The KA ordered us not to accept them.
We have never looked at people’s political views or past. This is the very first time that I or the kitchen has had to do this, and for reasons totally out of our control.”

Shuk co-owner Erez Beker said his business wanted to use both the KA and CK to support the whole community instead of playing politics.

“We were told that OBK can not accommodate us, because we are with CK, and it’s quite disturbing,” he said, adding that he has always tried to use Shuk’s food to bring people together, as an Israeli and as a Jew.

“For us it’s about supporting everybody in the community, but what we are getting back is discrimination. I don’t need people to support us, but when someone does a deliberate act to target us … that’s very disturbing.”

He also noted that Shuk has had pop-up events in the past with the KA providing a hechsher, which were very successful.

“OBK is meant to be a community kitchen that accepts people from all walks of life regardless of colour, race or religion. How does this happen? The community needs to be aware of it.”

KA rabbinic administrator Rabbi Moshe Gutnick defended the decision, drawing a distinction between catering for functions and pop-up events, stating the latter do not disadvantage kosher caterers and “give the community an opportunity to sample unique culinary fare”.

“Usually they are in a venue that agrees to shut down its non-kosher department entirely for the duration of the event,” he said. “Or alternatively, as in this case, they could be held at an existing KA-certified venue such as OBK and under their auspices. The Shuk pop-up was an OBK event. These two differences – the shutdown of the non-kosher kitchen or the pop-up being under the auspices of an existing licensee – especially differentiate pop-ups from regular catering.  Furthermore, as one-off events, that would otherwise not take place, they do not disadvantage our kosher licensed caterers.”

Rabbi Gutnick went on to say that since Shuk started selling food as kosher under CK, it takes issue with Shuk because they sell both kosher and non-kosher food.

“We encourage the community to only support Jewish caterers whose businesses observe Shabbat and exclusively serve kosher cuisine. Considering all the above, The KA could not support Shuk, and especially not in its regular catering, by allowing it to prepare food under its supervision within KA-certified kitchens such as OBK.”

Meanwhile, Laffa Bar has announced that when it opens within the next two months it will be under the auspices of CK using meat from Continental Kosher Butchers in Melbourne.