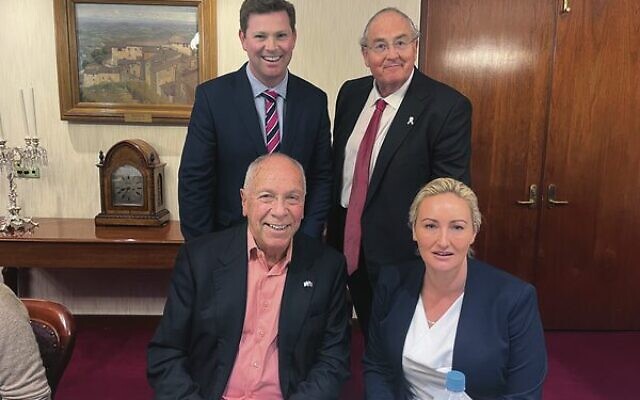 The intimate lunch, with Holocaust survivor Eddy Boas as the guest speaker, was attended by a small group of NSW MPs and senior parliamentary staff.

Dutch-born survivor Boas told the incredible story of his family’s survival. His mother, father, older brother and himself were deported to Westerbork concentration camp before being transported to Bergen-Belsen.

Boas was just three years old, but survived internment and a hellish train journey along with his whole immediate family.

After returning to Holland, the Boas family discovered their home had been stolen, so they made plans to emigrate to Australia.

In recent years Boas made it his mission to draw an official apology from the Dutch government to its Jewish population, something they belatedly did soon after Boas’ 80th birthday in 2020.

Parliamentary Friends of Israel chair Scott Farlow said he was honoured to host the first Zikaron Basalon at NSW Parliament.

“Mr Boas was engaging and moving and MPs had the chance to ask detailed questions about his experiences during the Holocaust – which was invaluable,” he said.

“I want to thank our partners – the NSW Jewish Board of Deputies and the Australian Association of Jewish Holocaust Survivors and Descendants for their contributions.”

“I have heard and read dozens of personal stories of survival during the Shoah and each time, I marvel at the bravery but also the gentle kindness of survivors who want to share their experiences,” he said.

“It is extraordinarily important that everyone in the community continues to learn about the horrors of the Shoah.”