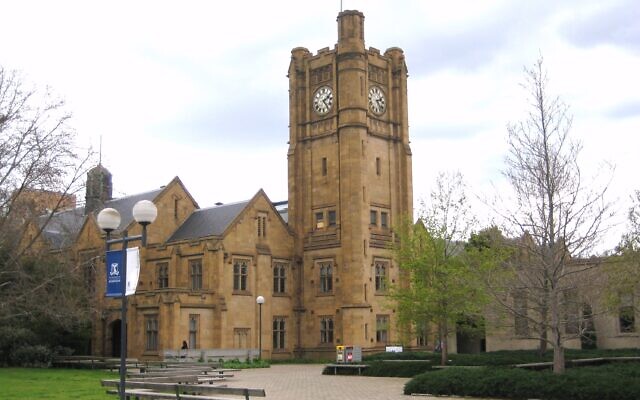 A MOTION passed by the University of Melbourne Student Union (UMSU) against Israel on Friday has been described as “blatantly antisemitic”.

The motion, titled “UMSU stands with Palestine – BDS and Solidarity Policy”, accuses Israel of “massacres, forced expulsion and ethnic cleansing of Palestinians”, calls Zionism “a racist, colonial ideology” and supports the right of Palestinians “to engage in self-defence against their occupiers”.

It goes on to claim to condemn “all forms of anti-semitism against students of the Jewish faith”.

Put forward by an officer and certain members of the People of Colour Department and Committee, the motion passed the Student Union Council 10-7. Students representing the ALP left and Right factions all voted against it.

“It is blatantly antisemitic,” she said.

“The motion controversially states: ‘Judaism or Zionism are not to be conflated’. It’s bad enough that the movers of the motion try to airbrush 3500 years of Jewish history in Israel out of the picture.

“But for these people to purport to speak for the Jewish people or Jewish students or what constitutes Judaism is outrageous in its ignorance, condescension and dishonesty.”

“Similarly, the throwaway line about standing in solidarity with Jewish students is insultingly hypocritical and tokenistic, given there was no attempt to hear the experiences and opinions of Jewish students.”

He continued, “AUJS commends those who acknowledged the blatant antisemitism of this motion and voted against it.

“We look forward to working closely with these councillors to ensure the UMSU upholds its values and ensures the council is reflective of all minority and diverse students. Melbourne University should be a place for nuance and dialogue, not hate speech.”

Executive Council of Australian Jewry co-CEO Peter Wertheim said, “The fact that the Students Union at the University of Melbourne is captive to the predilections of a small coterie of far-Left ideologues reflects very poorly on students and the university.

“Resolutions of this nature illustrate why there is an urgent need for Universities to adopt and apply the International Holocaust Remembrance Alliance Working Definition of Antisemitism.”

More in this week’s AJN.