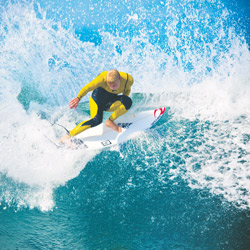 TWO-TIME world champion surfer Mick Fanning has apologised to the Jewish community for calling someone a ‘f***ing Jew’ after drinking too much at a private function.

Fanning called NSW Jewish Board of Deputies (JBD) chief executive Vic Alhadeff this week to personally apologise to the community after the comments were published in off-beat surfing magazine, Stab.

The eight-page article about Fanning featured the headline “Tales of a F***ing Jew” printed inside a Magen David.

Fanning, an ambassador for World Vision, was quoted in Stab after he met one of their journalists at a Rip Curl victory party after his second world surfing championship victory.

“He called me and apologised for what he readily acknowledged was inappropriate language,” Alhadeff said.

Fanning’s mother Elizabeth Osborne told The AJN this week her son has been extremely distressed about the situation.

“After he won the world title Rip Cup had a party at a house on the beach and that started about 3pm,” said Osborne, who also manages her son.

“Six hours later they had obviously been celebrating when the journalist was introduced to Mick, but Mick had always said he didn’t like how Stab magazine wrote off surfing.”

She said it was during the conversation with that journalist that the offending words were uttered.

“He called him a f***ing Jew and he knows it was inappropriate, but he was quite intoxicated and he is really upset and devastated that it happened.”

She said her son only realised he was speaking to a reporter the next day when he saw photos of the party showing the man holding a recording device.

Alhadeff said Fanning knew his words, spoken during what he thought was a private conversation, were wrong and “he has apologised without reservation”.

“But the magazine deliberately exploited and inflamed the situation by repeating Mr Fanning’s slur as a heading on eight pages,” the JBD CEO said.

“The message from this unfortunate saga is that such offensive language is never acceptable, and this has to be made loud and clear.”

In a statement issued last week, Fanning accepted responsibility for his words.

“I consider the article to be offensive and arguably designed to cause hurt and distress,” Fanning said, adding he had considered legal action against the magazine.

He said that before this exchange, he had not spoken with Stab reporters because he considered the magazine’s articles to be “racist and anti-Semitic”.

“I strongly object to views, statements and comments of that nature,” he said. “I acknowledge that my decision to use words that were inappropriate — albeit in an attempt to be ironic, knowing they were of the type favoured by the magazine — was misjudged and wrong.

“I don’t have or condone, any form of racist or, more particularly, anti-Semitic view,” the surfer said.

Fanning’s quotes are not the first time the Jewish community has complained about Stab magazine. Last month, it published part of Sacha Baron Cohen’s satirical song ‘Throw Jews Down The Well” on its website.

The AJN approached the editors of Stab for a reaction but they have not responded.