In 1928, an idea formed in Slawa Horowitz-Duldig’s head. After a cold and rainy day, Slawa, who was forced to carry a big umbrella around, decided that something needed to change.

“I armed myself with a big umbrella and muttered to myself: ‘Why on Earth must I carry this utterly clumsy thing? Can’t they invent a small folding umbrella which could be easily carried in a bag?’” she wrote before she passed away in 1975.

So, she invented the change.

She drafted designs, obtained spokes, engaged a watchmaker to help with the manufacturing process, bought the fabric and attached it herself to the shaft and spokes. And so, the modern folding umbrella prototype was created.

Ten years later, Slawa, her husband Karl, a renowned sculptor, and their daughter Eva found themselves at the threshold of war, escaping to Switzerland, before arriving in Singapore as refugees. After being expelled as enemy aliens, they arrived in Sydney on September 25, 1940.

The Duldigs’ story is so fascinating that Eva de Jong-Duldig wrote it all down, publishing a book almost eight decades later. Now, Driftwood: Escape and survival through art has been turned into a musical.

Based on the original memoir, Driftwood – The Musical has been adapted for the stage by award-winning playwright Jane Bodie and features original music and arrangements by Anthony Barnhill, who conducted West Side Story and will be conducting The Phantom of the Opera for Opera Australia later this year.

Slawa’s granddaughter, soprano Tania de Jong AM will be bringing her grandmother’s voice back to life.

“When I read the work, it struck me just how theatrical it was,” de Jong told The AJN. While she initially saw it as a feature film, she said she always saw the work on stage in some way.

“The nature of the story lends itself to these incredible theatrical scenes.”

Driftwood – The Musical follows Karl and Slawa’s amazing artistic lives in pre-war Vienna, touches on her invention of the foldable umbrella and dives into how they escaped from the Holocaust and rebuilt their lives and careers as artists in Australia, which de Jong largely attributes to her grandmother’s foresight.

“My grandmother was one of the most inspirational people,” she said.

“She encouraged my creativity and we always made stuff together, sculptures and art and all sorts of things. And she was a woman of incredible strategic foresight. She was able to see what was happening with the Nazis in the Holocaust, and if it hadn’t been for her foresight, we wouldn’t be here today.”

De Jong explained that her grandfather sculpted a bust for a border agent who, in exchange, provided visas for Slawa and Eva to join Karl in Switzerland. While Slawa still holds the patent for the foldable telescopic umbrella, while the family was in Switzerland she was approached by the German authorities to sell her royalties, meaning she unfortunately never saw another cent from her incredible invention.

When Slawa died in 1975, it was her wish that the family home and artists’ studio in East Malvern be preserved as a museum. The Duldig Studio, museum and sculpture garden, founded by Eva de Jong-Duldig, became a public museum in 2002 and is run by an independent Board and professional staff. The museum showcases works of art by Karl and Slawa Duldig as well as the prototypes of Slawa’s umbrella and many other items from Vienna that were eventually returned to the family after the war.

Alongside the Duldig Studio, Driftwood – The Musical serves as a tribute to the Duldigs’ remarkable story. 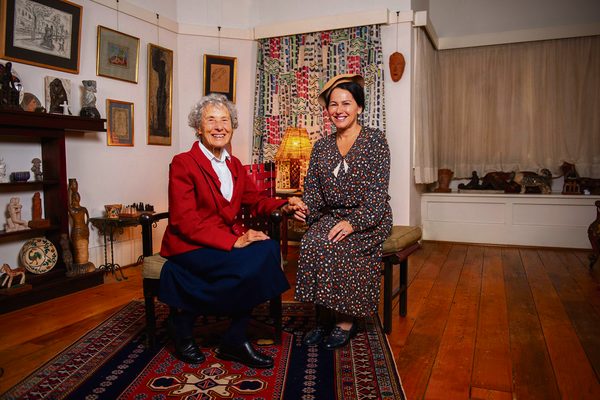 “I think people will be very moved by the story,” de Jong mused. “We all have incredible stories. It’s a miracle that any of us are here when you think about the journeys that our families have been on over time. I hope that people will feel inspired and moved, and realise just how important it is to create unity and harmony between diverse people, and to be inclusive no matter what.”

When it comes to the music for the production, de Jong explained that there is a taste of different eras.

There are timeless classics of opera, musical theatre, pop songs and re-inventions of piano and orchestral pieces too.

De Jong describes it as “powerful drama, combined with original compositions and songs” and “a deeply moving and compelling human story”, explaining that the music transcends everyday life, helping us all to experience the present more powerfully.

“Some songs and melodies say more than a whole act of dialogue often can,” she said.

But what de Jong is most moved by is channelling her grandmother.

“My grandmother, from a spiritual perspective, I’ve always felt her presence in my life. I feel that she’s been helping me and guiding me to find my creative voice and to express that,” she said. “And also she was very entrepreneurial. I mean for a woman in that era, in the 1920s, to invent something and patent it, it’s really pioneering.”

Driftwood – The Musical premiers at Alexander Theatre on May 13, before moving to Chapel Off Chapel. Tickets