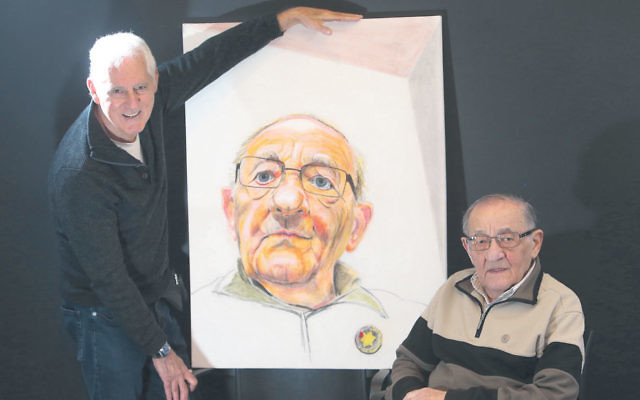 ARTIST Jeffrey Kelson has pinned his hopes on success in this year’s $100,000 Archibald Prize on the determined look of 94-year-old Holocaust survivor Moshe Fiszman.

Kelson painted Fiszman as one of 20 portraits of survivors featured in the Tribute exhibition held at the Jewish Holocaust Centre (JHC) in Melbourne in April.

“Moshe has great strength of character and his personality shows through in the portrait – it is an affirmation of life,” says Kelson, who visited him to talk about his life while snapping about 150 photos.

“I went back to my studio and found the photo that most represented him, and I went back to discuss it with Moshe. And he instructed me, ‘Do not paint me in a lighthearted way.’”

Kelson says the final result shows Fiszman’s strength and resilience, but also captures the hardships he endured during his life.

The entry, titled Tribute, will be among hundreds of works considered by the Art Gallery of New South Wales for its prestigious Archibald Prize.

Fiszman was born in Radom, Poland, on November 29, 1921. He survived the war years despite being interned in camps at Majdanek, Birkenau, Vaihingen and Dachau.

He was liberated by the American Army and spent time, after being hospitalised, in a displaced persons camp in Germany and another in Bari, Italy, where he met his future wife, Franciska, who was born in Poland.

In January 1949, having obtained travel permits, the couple arrived in Melbourne where they live today. Until his retirement in 2001, Moshe worked in the garment industry. He is a volunteer guide at the JHC.

His daughter Lena Fiszman is office manager at JHC, and also performs on stage with the theatre troupe Los Trios Amigos alongside “bubba” Jack Felman and Alan Brostek.

Kelson has previously entered portraits in the Archibald Prize, including a portrait of actor Bud Tingwell and several self-portraits, but without success and hopes his latest entry will fare better.

“This is the best portrait that I have done for ages,” he says.

Kelson is a retired architect who now paints, conducts lessons for private students in his Prahran studio and teaches in schools.

“I took up painting as a boy and, having nice Jewish parents, they wanted me to be a professional of some kind, so I became an architect.

“I always kept painting and when I retired about 12 years ago I decided to start painting seriously.”

Kelson’s parents came to Australia during the 1920s – his father was from Poland and his mother from the Ukraine.

“My grandfather on my father’s side had 10 siblings and they all emigrated to Palestine – they were Zionists and settled in the Sharon Valley,” he says.

When Kelson undertook the Tribute exhibition at the JHC earlier this year, he was aware that the project had a certain urgency as the subjects were aged in their 80s and 90s.

“Meeting Moshe and the other survivors gave me a gift,” he says.

“I felt that their survival and their lives since are a gift to us all.

“There was a sense of urgency to paint their portraits as we don’t know how much time we have got before they are gone. I took on the project to honour the survivors.”