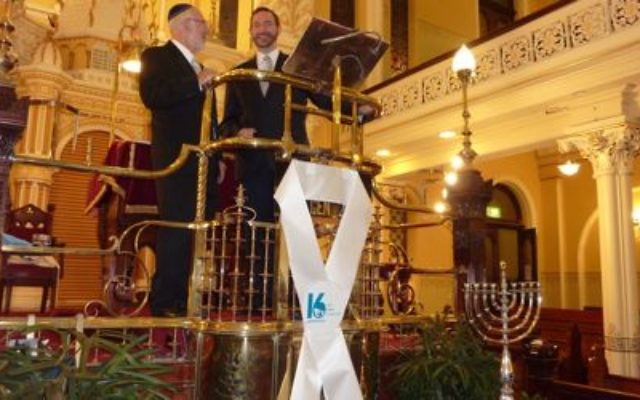 LIKE any other, the Jewish community is not exempt from the scourge of domestic violence.

That’s why on Friday, November 25, Sydney’s JewishCare will join 17 synagogues and organisations around Australia to take part in White Ribbon Day, to raise awareness about domestic violence.

The day coincides with the United Nations International Day for the Elimination of Violence against Women.

JewishCare president Allan Vidor said his organisation dealt with about 40 cases of domestic abuse each year, a figure that was slowly increasing.

“There’s really no evidence to suggest that it is any different to the wider community,” Vidor said.

The theme of this year’s White Ribbon Day is “I swear”, with men and women around the country being encouraged to swear “never to commit, excuse or remain silent about violence against women”.

“There’s a lot of evidence to suggest that this scourge tends to be socially and culturally sensitive,” JewishCare executive officer Warren Hurst said.

“[So] if you make it clear to your male friends that this is not acceptable, then the hope is that they will either stop or seek help.”

The first stage of JewishCare’s contribution to this response will be a special breakfast on the morning of White Ribbon Day, at which former NSW opposition leader John Brogden will be guest speaker.

This year will be the fourth year the breakfast has been held.

“It’s been amazing how it’s grown, from under 20 participants in the first year, and we expect 80 to attend this year,” Vidor said.

“For the first time, there’s a bit of corporate support.

“It’s reinforced the fact that this whole idea of trying to combat domestic violence is certainly gaining traction in the community.”

The second stage is “16 Days, 16 Rabbis, 16 Synagogues”, an initiative where shuls in Sydney have been engaged to spread the White Ribbon Day message.

Participation will range from shuls displaying a white ribbon on their bimah to providing pamphlets for women congregants.

Celebrity blogger Mia Freedman will be the guest speaker at a White Ribbon Day dinner at Emanuel Synagogue, to be catered by the Emanuel “Taste of Summer” vegetarian cooking class.

“It’s been very heartening that the shuls and rabbis have become strong partners with JewishCare in this initiative.”

Shuls are once again being encouraged to display white ribbons on their bimahs as The Great Synagogue (above) has done in recent years.