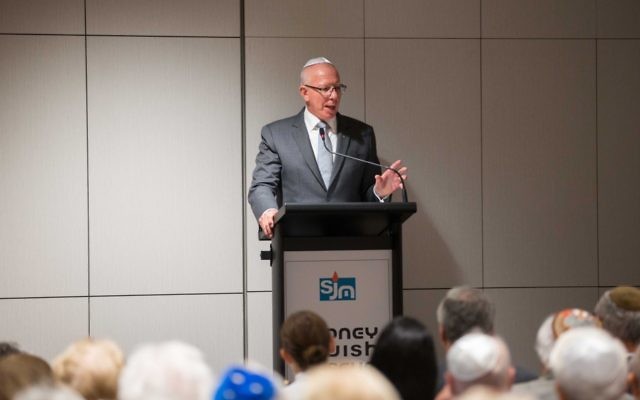 MORE than 250 people attended a ceremony to commemorate the liberation of Auschwitz and the United Nations (UN) International Holocaust Remembrance Day at the Sydney Jewish Museum late last month.

NSW Governor David Hurley, who visited Auschwitz in 2014, gave the keynote speech and emphasised the importance of teaching future generations about the Holocaust.

“Remembrance is about not just remembering those who lost their lives, who have suffered and who survived, and providing support for their families, but it is doing action.

“If we are not, as we see today, educating people about what the Holocaust meant, and drawing attention to its echoes today, then we are failing six million people.”

The remembrance ceremony, which was organised by the Sydney Jewish Museum and the Australian Association of Jewish Holocaust Survivors and Descendants, was also attended by consular officials from 16 countries, Deputy Leader of the Opposition in the NSW Legislative Council Walt Secord, Member for Coogee Bruce Notley-Smith, communal leaders and 25 survivors of the Holocaust.

Auschwitz survivor Olga Horak also emphasised the importance of survivors sharing their experiences of the Holocaust.

“Survivors have the strength to tell a vital story: the truth,” Horak said. “It puts memories on the stage of real life.”

These sentiments were echoed by Jared Engelman, who commented that, as a member of the third generation since the Holocaust, he understands the importance of educating and relaying the story of his grandparents to ensure that the atrocities never occur again.

Drawing strongly on the theme for this year’s UN International Holocaust Remembrance Day, “The Holocaust and Human Dignity”, the director of the UN Information Centre in Canberra, Christopher Woodthorpe, read out a message from UN Secretary-General Ban Ki-moon.

Woodthorpe said, “The memory of the Holocaust is a powerful reminder of what can happen when we stop seeing our common humanity.”

The commemoration ceremony also included the lighting of six candles by six Holocaust survivors, in honour of the six million Jewish victims of the Holocaust.