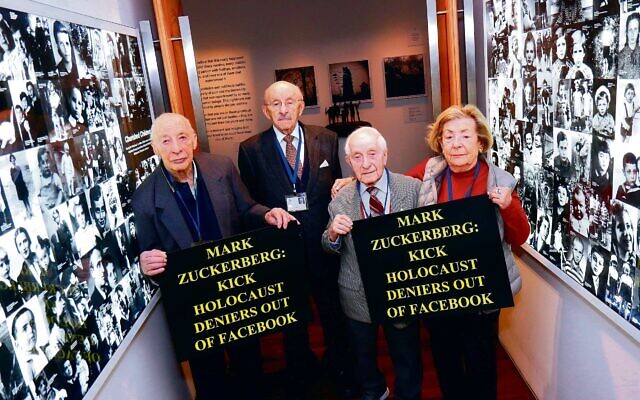 I raised the alarm that antisemitism in social media was normalising antisemitism in society back in 2008. Facebook at the time had around 60 million users, a fraction of today’s 2.7 billion users. I highlighted how Holocaust denial promoted hate both on the platform and in society. After 12 years of resistance, Facebook has finally reversed course and accepted this.

Now Facebook meets the real challenge. Changing the policy is only the first step, implementing it will be the real test. Staff need to be trained. Artificial intelligence tools calibrated. Facebook’s new journey will take time, and it will require the Jewish community’s help.

“It’s a relief to know that Holocaust deniers won’t have Facebook as a platform anymore to spread their venom. There’s a…

The response the Online Hate Prevention Institute received to our announcement of Facebook’s change in policy highlights the challenge. Our Facebook post was flooded with comments, mostly supportive, but some promoted Holocaust denial. The content came in various styles.

Case 1: A user posted a long comment which argued for a definition of Holocaust denial, then said labelling arguments as denial was little more than name-calling by those unable to urge their case. It went on to assert that the number of Jews who died in the Holocaust had been “revised downward considerably”. They highlighted history is written by the winners, “including re WWII misrepresenting some of the actions and reasons for policies behind them of Adolf Hitler and associates and sometimes putting half truths and lies”.

Case 2: A user posted, “What’s hate speech about the truth? Only lies need protecting” and that “repatriations [sic] are a big incentive to tell lies”. They linked to a Holocaust denial website with text, images and documents that range from outright denial to distortion. The site includes a “Beginners Guide to Revisionism” (Holocaust deniers call themselves historical revisionists) and a “Holocaust deprogramming course”. It links to a wide range of denial sites, including the major Holocaust denial publishers like the Institute for Historical Review. It has articles claiming to be testimony that the Holocaust is a lie and articles claiming the documentary evidence of the Holocaust was staged. It claims Jews were responsible for the Holocaust and the real crimes were against Germans, Russians, Poles and Ukrainians.

The same user posted a range of Holocaust denial, antisemitic and pro-Nazi content on their profile. One linked to a blog post, “Living in Hitler’s Germany – An Eye Witness Account of a Glorious Era”. A friend comments, “Greatest leader ever” and they reply, “Yep! If people understood the truth about ww2 we would be halfway home.” One can only wonder what’s needed for the other half of the journey home.

They post a meme with sheep on a train tack walking into Auschwitz, a giant Magen David placed over the entrance. The text says Israel “are our #1 enemy and our worst nightmare!” and that “Zionists are holding all our governments hostage and controlling everyone with the financial system.” Classic antisemitism and abuse of the memory of the Holocaust. They also link to a Holocaust denial video on BitChute. The video seeks to deny one of the main mechanisms used to murder Jews in the Holocaust, the gas chambers. It presents flawed research which has been disproven while attacking scholarship which goes against its thesis.

Case 3: A user commented, “People who are saying that this is a good thing are f***ing delusional. Freedom of speech is far more important.” Another asks, “What has Holocaust denial got to do with hate speech? Sounds like just another loss of freedom of speech to me.” A third states, “I think people should have the right to voice their opinion rationally regardless the topic. We all have the option to disagree and ignore as we do anyway” and later comments, “I myself am not a denier but if some wish to entertain that notion that is their right to do so.” Challenged that they would defend even Goebbels, they then did so saying, “Goebbels had his rights to his opinions.”

Hate speech has consequences. The hate speech of Goebbels was backed with the power of the state and the media. Today Facebook provides even more propaganda power. That power has been used on Facebook to spread incitement to genocide against the Rohingya in Myanmar.

As it comes to grip with its new policies against Holocaust denial and distortion, Facebook will need our help and advice. Mistakes will be made, and some reports will be wrongly rejected. They will need to be reconsidered, with the support of experts. Facebook is, however, heading in the right direction. While we can still find Holocaust denial with ease, we hope that will soon change.

Working together with the Jewish community, Facebook and other experts will be able to create a safer and more inclusive online public sphere. It may not be totally free of the scourge of Holocaust denial and distortion, but if we can have confidence the response will be swift and accurate, we’ll be in a much better place than we have been for the past 12 years.

Dr Andre Oboler is CEO of the Online Hate Prevention Institute, a lecturer in cybersecurity at La Trobe University and a member of Australia’s delegation to the International Holocaust Remembrance Alliance.