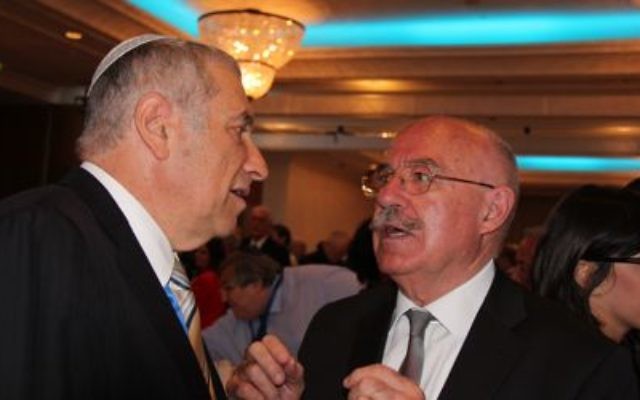 ON the streets of Budapest, Executive Council of Australian Jewry (ECAJ) president Danny Lamm had a personal brush with the growing spectre of anti-Semitism in Hungary, when he and other visitors were accosted by thugs. Lamm was attending the World Jewish Congress (WJC) 2013 plenum this month and was walking with other delegates in a central city neighbourhood when the incident occurred.

Groups of delegates, flanked by security personnel, were strolling back to their hotel from a Shabbat dinner at the Dohany Street Synagogue. “I was lagging behind, walking with someone who was a bit slower, when suddenly we were set upon by a group.”

Lamm was confronted by a man rushing towards him. Plainclothes detectives quickly intervened, but not before the ECAJ president and others were subjected to a torrent of anti-Semitic insults from around 20 people chanting Nazi slogans.

“The guard told me afterwards they were saying ‘We’re going to get you like in ’44,’” Lamm told The AJN, a reference to the massive round-ups of Jews in Budapest under the Nazis and Hungarian Arrow Cross in 1944.

The threat was chilling for Lamm, whose paternal grandparents had been among some 600,000 Hungarian Jews sent to Auschwitz. “It was very ugly … we just carried on walking.”

In the wake of the attack, one of the assailants has been sentenced to three years in prison and is appealing his sentence, while two others have each received two-year suspended sentences.

The WJC plenum is usually held in Jerusalem, but switched to Budapest to show solidarity with Hungary’s 100,000-strong Jewish community, which is combating an explosion of anti-Semitism.

Lamm said he was disappointed that Hungarian PM Viktor Orbán, in his address to the WJC, did not openly commit to having nothing to do with the anti-Semitic Jobbik party, which received 17 per cent of the vote in the 2010 election and could be part of the government after next year’s election.

In a conversation with Orbán, Lamm urged him to sign the London Declaration on Combating Anti-Semitism and was surprised the Hungarian PM had not heard of it. After Orbán and Foreign Minister János Martonyi were shown the cover of The AJN’s April 26 edition featuring Julia Gillard signing the document, the pair started making enquiries.

“There’s a possibility as a result of my direct involvement as the head of Australia’s Jewish community that it may lead to them signing the London Declaration, which is a public affirmation,” said Lamm.