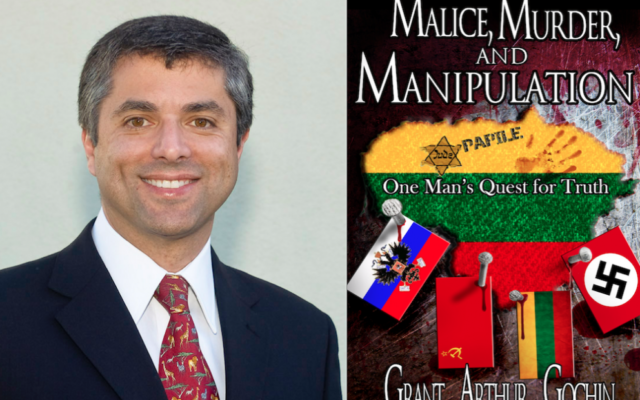 Grant Gochin and his new book.

AUSTRALIAN Holocaust researchers have applauded an activist’s campaign for the truth about the World War II records of two Lithuanians he claims have had their anti-Semitic activities whitewashed by Lithuania’s state-run research into the Holocaust.

Grant Gochin, a Jewish American of Lithuanian background, has written to Lithuania’s parliament protesting against published findings from the Centre for the Study of the Genocide and Resistance of Residents of Lithuania.

During the Shoah, Lithuanian paramilitaries collaborated in exterminating some 220,000 Jews, 96 per cent of the country’s Jewish population.

Noreika was administrator of Šiauliai district, and according to the centre, his “writings” encouraged locals to transfer Jewish possessions to social institutions.

“Historical documents show otherwise,” said Gochin, alleging Noreika’s “writings” were in fact orders — and “the property and funds obtained were used for the Nazi war industry … The centre in its finding omits these circumstances and documents.”

Gochin also objected to findings Noreika had no role “with organising or carrying out the mass-murder of Jews”, stating it “demonstrates an inability to come to terms with the events of the Holocaust”, in which, he noted, dispossession was a prelude to genocide.

Noreika was sentenced to death by a Soviet military court and executed in 1947 but the post-Soviet Lithuanian government rehabilitated his name in 1991.

Gochin also alleged the Nazi collaboration of Lithuanian officer Skirpa has been minimised. The centre found Skirpa told countrymen to encourage Jews to flee but omitted his threats of harsh punishment to Jews who remained. Skirpa became a Nazi puppet prime minister on whose watch some 5000 Jews were murdered.

Gochin is particularly incensed at the finding that Skirpa “spoke in the language of the time period he lived”.

Skirpa emigrated to the US in 1949, where he died 30 years later and his remains were repatriated to Lithuania.

In 2012, he authored a history of Lithuania’s Holocaust distortions,  Malice, Murder, and Manipulation: One Man’s Quest for Truth.

Melbourne filmmaker Danny Ben Moshe, who made the 2012 documentary Rewriting History, about Lithuania’s Holocaust revisionism, told The AJN the approach to these two wartime figures exemplifies “the broader story of the rewriting of history in Lithuania”.

Michael Cohen, head of research at the Jewish Holocaust Centre, added: “The conflation of the Holocaust with Soviet persecution of Lithuania’s population, and the ongoing denial of the role of Lithuanian citizens … remain at the forefront of political and historical discourse.”