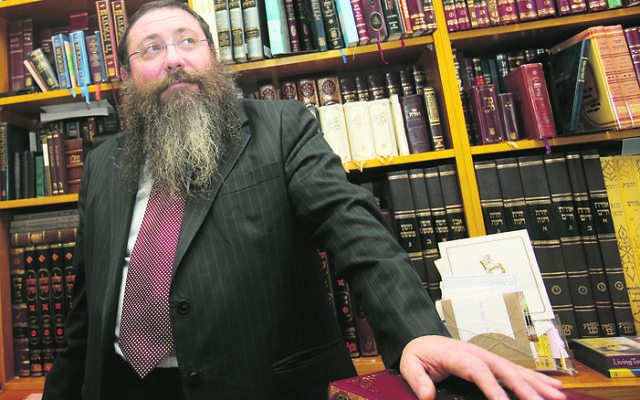 RABBI Moshe Gutnick this week took over from Rabbi Yaakov Glasman as the top rabbi in Australia.

“I have accepted the nomination of my colleagues to become president of Rabbinic Council of Australia and New Zealand (RCANZ) especially cognizant of the challenges facing the Australasian rabbinate at this time,” Rabbi Gutnick told The AJN.

“It is my fervent hope to be able to bring to bear my many years of experience in the rabbinate to both unite and strengthen the rabbinate and Torah Judaism working together with the lay leaders of our community.”

The AJN understands that Rabbi Gutnick was urged to run for the position as he is respected by all factions within the Australian Orthodox rabbinate.

He is the rabbinic administrator of the Kashrut Authority in Sydney and has previously served as president of the Rabbinic Council of NSW and the Organisation of Rabbis of Australasia, which was the previous incarnation of the RCANZ.

Rabbi Gutnick said he intends to do his best to follow the path of Maimonides, which calls upon people to find a middle road away from extremes and extremism.

“It is a path that unites rather than divides.

“I am always reminded of the saying of a senior member of the rabbinate OBM, who would refer to the Australian Orthodox rabbinate as a sleeping giant.

“Perhaps the giant has already awoken, but I would like to see a gentle, compassionate, caring giant.”

He also paid tribute to Rabbi Glasman, who stood down at the organisation’s annual general meeting on Wednesday.

“On behalf of the entire rabbinate I would like to thank my predecessor, Rabbi Glasman, for the youth and enthusiasm he engendered in the position.”

Rabbi Glasman said representing the Australasian rabbinate has been one of the most rewarding experiences of his career.

“I feel honoured to have served alongside such a talented and experienced executive committee,” Rabbi Glasman told The AJN.

“Our clear challenge from the outset was to rebuild the reputation of the rabbinate following the fallout from the Royal Commission and I believe we have achieved this to a large extent.

“I’ve thoroughly enjoyed the role but my personal highlight was dining with the Prime Minister ​who is a true friend of Israel, when I delivered a speech on Judaism in Canberra earlier this year.”