Eden Shifroni has always had a deep appreciation for music. The Moriah College graduate was part of the music program throughout her schooling career, but it was always jazz that called to her. In fact, when she applied for the Sydney Conservatorium of Music, she auditioned for both the jazz and classical voice courses. But ultimately, it was opera that called her name.

“I definitely think my passion for music was ignited at a very young age,” Shifroni, who grew up watching her grandfather Shimon Farkas sing as the chazzan at Sydney’s Central Synagogue, told The AJN.

“I feel grateful to have had a musical education as part of my school life. Even though I did not study any opera really at school, the exposure to different art forms and my involvement in the school orchestra, jazz band and choirs was when the seeds of my musical curiosity were planted. I strongly believe in the value of an arts education. That school age is when curiosity is sparked and a perfect time to start absorbing different art forms.”

Struggling to decide between jazz and opera at the young age of 17, Shifroni explained that while she was auditioning for the Conservatorium, she was approached by one of the opera singing teachers who convinced her to take the opera path.

“Honestly, straight away, I fell in love with opera,” she recalled. “For me, what drew me most to opera and inspired me was the way in which it was an art form where all art forms meet. Music, drama, literature, architecture and set, fine art, costume, dance, lighting and history.”

Shifroni also notes that it is an art form that transcends time, with many operas performed in a traditional way still being relevant today, and other operas receiving a modern-day spin to appeal to a wider audience.

“There is value in not restricting yourself to one sound or style. Being open means giving yourself permission to be creative.”

Part of Shifroni’s training is learning the languages that she needs to perform in. So far, she has performed in English, Italian, German, French, Spanish and Hebrew. She believes the language, together with the music, helps her express herself.

“I get emotionally involved with the music, it’s very difficult for me to detach myself from the music. It is very intimate and vulnerable as my body is my instrument. When I perform, I aim to engage the audience by committing to portraying the character just as much as I commit to delivering my voice and sound,” she said.

But, she says, while she’s studying and performing operas, she has not limited herself to one genre.

“Music is a way to express yourself, and to have a voice … I still enjoy singing jazz, soul, RnB; there are things that need to be said in every genre of music. It just happens that I have chosen opera as my medium to communicate my message to an audience. To reflect on ourselves and society.

“Actually, one of my favourite quotes from an artist that I draw much inspiration from, Jessye Norman, [says] ‘pigeon-holes are only interesting to pigeons’. There is value in not restricting yourself to one sound or style. Being open means giving yourself permission to be creative.”

For Shifroni, another part of the appeal of opera is that the literature can be quite thought-provoking and confronting, forcing performers and audiences to reflect on themselves and their relationships. In fact, Shifroni notes that opera isn’t so far removed from our current reality, saying, “It certainly reflects a lot of the love, loss and curiosity that are an essential part of the human experience.”

And, she says, the excitement is that things don’t always go to plan.

“I love that opera is a live art form,” she noted. “Mistakes happen. Things don’t always go to plan, similar to the human experience. In fact, I find it to be an art form that humanises us in a world which often seeks to dehumanise us.” 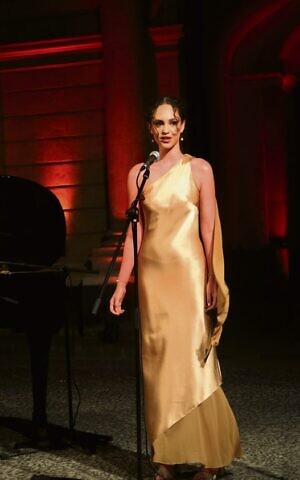 So far, Shifroni’s career has taken her to some wonderful places. Earlier this year, she attended the Mediterranean Opera Studio and Festival in Sicily, studying and performing the roles of Musetta in Puccini’s La Bohème, and Suor Genovieffa in Puccini’s Suor Angelica. She also sang in multiple concerts, including an outdoor concert in a piazza in Sicily attended by the mayor of Caltagirone. Another highlight was singing in the Sydney Opera House for the first time, conducted by Simone Young, which she described as “an amazing experience”.

So what’s next for the rising young star? She is currently completing her Masters of Opera and simply wants to enjoy her time in Sydney before she begins world domination, explaining that she’d like to perform around the world. What brings her comfort as she embarks on a global career is knowing that there are Jewish communities all around.

“The amazing thing about the Jewish community is that if I relocate to the other side of the world, which is a most likely possibility, whether that be New York, Paris, or London, I find comfort in knowing that there is a Jewish community there that will welcome me in and I will find a piece of home in that,” she said.

“This industry can be very isolating, but knowing that I can connect to Jewish people, wherever I may go, is extremely encouraging and makes the notion of travelling around the world a bit less lonely.”