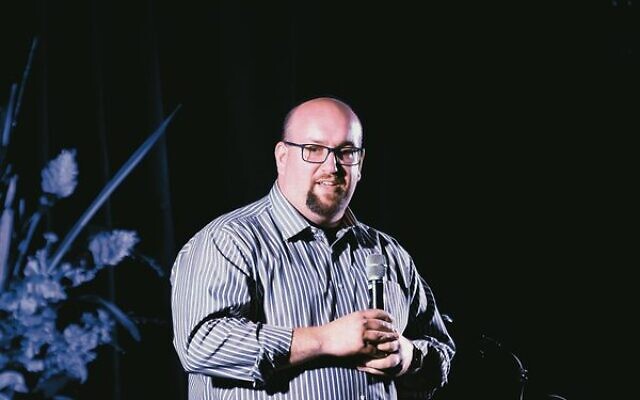 Rabbi Gersh Lazarow at a concert at TBI in 2016. Photo: Peter Haskin

ACCUSATIONS that Rabbi Gersh Lazarow, senior rabbi at Temple Beth Israel (TBI), plagiarised sermons, drashes (commentaries) and articles over a number of years cast a shadow over TBI’s AGM this week and have sent shockwaves through the wider Progressive community, with Progressive Judaism Victoria’s president labelling “any cases of plagiarism as totally anathema to the ethical and moral basis of Judaism”.

Meeting on Zoom on Monday night, members expressed concern over allegations of at least a dozen incidents of plagiarism levelled at the rabbi in a document leaked to The AJN. The dossier contained primary sources sighted by The AJN, whose October 22 news story was quoted in mainstream media.

Prior to The AJN report, Rabbi Lazarow had apologised for one incident after words were “published in his name” in a Union for Progressive Judaism (UPJ) newsletter “misrepresenting” the original author’s “work as his own”.

The rabbi did not, however, respond when asked by The AJN to comment on the other alleged incidents that subsequently came to light.

Addressing some 300 members, TBI president Joanne Loewy Irons told the AGM, “As the community is aware, Rabbi Lazarow is on medical leave. As such, the board is restricted in conversations and processes that in the ordinary course of events might have already occurred.”

One TBI member noted, however, that “both the Central Conference of American Rabbis [CCAR] and the Union for Reform Judaism specifically denote plagiarism as an ethics violation” and asked, “Does the board consider rabbinic plagiarism a serious issue?”

Loewy Irons said that “the board takes the allegations of plagiarism very seriously”.

Noting that “as rabbis we must do all that is in our power … to elevate standards of moral behaviour” and “are expected, therefore, to behave at a level worthy of emulation”, alongside cautions against sexual misconduct, substance abuse and financial impropriety, the CCAR Code of Ethics states under the heading “Intellectual honesty”, “Rabbis will adhere to the traditional principle of b’shem omro (refraining from plagiarism) and maintaining the integrity of their own credentials.”

The Union for Reform Judaism’s Ethics Code, meanwhile, states, “It is never acceptable to take credit for work that is not one’s own, and proper recognition should be made to the party whose work product is used. Plagiarism, copyright infringement or similar behaviour is unethical and unacceptable.”

One reader described him as “an insightful teacher and a man of great heart and intellect”.

Another said he is “a wonderful leader and has been a huge support for my family during difficult times”.

A third posted that “it should never be an expectation for a rabbi to deliver original content, sermon after sermon, letter after letter”, while others downplayed the seriousness of the allegations and spoke of a “smear campaign” and a “witch hunt”.

Loewy Irons reported that TBI is in the process of appointing an executive director and establishing a human resources unit – plans The AJN understands are partly in response to concerns over Rabbi Lazarow’s earlier involvement in administrative duties, and tensions with other clergy. The rabbi resigned, then retracted his resignation earlier this year, admitting “relationships were fundamentally tested and in some cases broken”.

The AGM was chaired by Jewish Community Council of Victoria president Daniel Aghion, who told the meeting, “I intend to be fair and even-handed.”

But those wanting answers from the board about issues relating to the senior rabbi were dismayed that the meeting was too restrictive. Members were notified only hours beforehand that board candidates would be barred from speaking prior to the balloting, and that messaging one another in chat was banned.

Loewy Irons, who became president when predecessor Craig Levin resigned unexpectedly in June, was officially elected to the role, and key board members were re-elected. Candidate lists showed that of the five new members, three had been proposed by Loewy Irons.

After the AGM, Progressive Judaism Victoria president Philip Bliss said the roof body “views any cases of plagiarism as totally anathema to the ethical and moral basis of Judaism and is simply at a loss to understand how this has come about”.

He added, “Our rabbis work extraordinarily hard every day of the week to serve our members and the wider community and it would be unfair for these cases of plagiarism to taint their reputation.”

UPJ co-president Brian Samuel stated, “TBI has long been the mothership of Progressive Judaism within the region, for over 90 years.

“Events that have occurred in the past few months have shaken its foundations, but based on the solid support of the community, our hope is that any issues related to information published in The AJN last Thursday can be quickly resolved, so the organisation can commence a healing process as it looks forward to returning to face-to-face services and activities in coming months.”