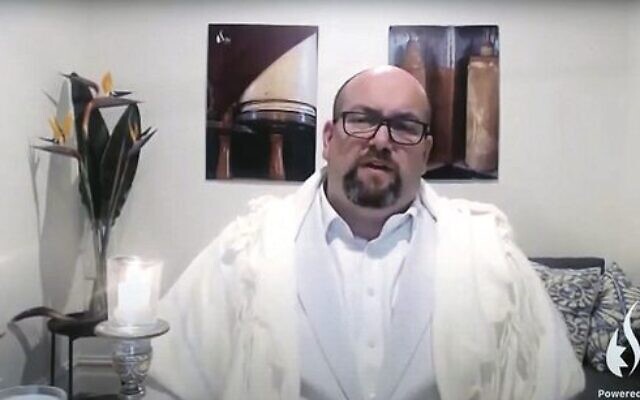 TEMPLE Beth Israel (TBI) is once again in turmoil amid revelations that Rabbi Gersh Lazarow, its senior rabbi, has on multiple occasions apparently plagiarised several sermons he delivered as well as rabbinical drashes (commentaries) and articles that he has written.

The AJN understands that a longtime TBI congregant, noticing an Americanism “fall” instead of “autumn” in a September 20 TBI email newsletter by Rabbi Lazarow about Succot, went online and discovered that the passage on the festival written by the rabbi was almost identical to one on the US site, ReformJudaism.org.

After the congregant contacted the rabbi and TBI president Joanne Loewy Irons, Rabbi Lazarow allegedly responded blaming staff errors and stating that the newsletter had been prepared in haste.

However, another congregant discovered a drash by Rabbi Lazarow published in the Union for Progressive Judaism (UPJ) email newsletter with passages closely resembling a previous overseas drash.

In its response, the UPJ posted on its website that Rabbi Lazarow “acknowledges that words we published in his name are in large part the teachings of Rabbi [Eric] Grossman of the Akiva School in Quebec. He wholeheartedly apologises for misrepresenting Rabbi Grossman’s work as his own and unreservedly asks for the forgiveness of colleagues and the community.”

However, further comparisons, some of which were leaked in a document to The AJN, revealed at least a dozen examples of sermons or pieces since 2018, containing identical or near identical wording from other sources.

Rabbi Lazarow’s Kol Nidrei and Erev Rosh Hashanah sermons of 2021, his “Message From Our Rabbis” from 2020, and the Kol Nidrei and Rosh Hashanah sermons of 2019 appeared to contain significant plagiarism. Four drashes by Rabbi Lazarow in the UPJ’s newsletters apparently included plagiarised passages – one for which he issued the apology – as well as two drashes under “Elul Reflection”. A drash in TBI’s Kol Yisrael magazine this year appeared to have been substantively plagiarised.

Some of the material sighted by The AJN included a 2021 Kol Nidrei sermon on empathy in which Rabbi Lazarow related a visit to the St Kilda Botanical Gardens with his family when he saw a man hurt himself tripping over a sprinkler.

In an earlier US sermon, the author was “in Central Park with some friends” witnessing an identical mishap with a sprinkler.

In a 2019 Rosh Hashanah sermon, a passage in which Rabbi Lazarow related turning to his family for consolation from life’s woes was nearly identical to a passage in a 2018 US sermon, except that the names of Rabbi Lazarow’s family members replaced those of the US rabbi’s family.

“The findings of this search are nothing short of explosive,” the congregant conducting the research stated, noting that there are a number of incidents “where Rabbi Lazarow has used stories of other people’s lives, or of their emotional state of mind, and simply changed the names of the participants to reflect his own life”.

Additionally, an article by Rabbi Lazarow submitted to and published in this year’s Rosh Hashanah supplement of The AJN included an unattributed passage, with some sentences identical to, and others closely resembling, lines written by celebrity author Michal Oshman.

Approached by The AJN on Monday, Rabbi Lazarow had not responded at the time of going to press.

However, in a statement on Tuesday, Loewy Irons told The AJN, “TBI is aware of these serious allegations and is considering next steps,” adding the rabbi “is on medical leave and our primary concern is for his wellbeing”.

The incidents of apparent plagiarism are the latest episode in a turbulent period for Rabbi Lazarow, who had emigrated from South Africa, was rabbi of The King David School and Etz Chayim Synagogue, and since 2013 has been senior rabbi of TBI.

In 2018, he was diagnosed with leukaemia, but later returned to his TBI duties. In May this year, following tensions within TBI’s board and congregation, and the wider Progressive community, he publicly resigned, telling The AJN he was doing so with “an incredible sense of clarity”.

However, with support from the TBI board, he rescinded his resignation in June. In a crisis forum of TBI members that month, the rabbi admitted that in recent times “interpersonal relationships were fundamentally tested and in some cases broken … in hindsight, I regret so much”.

At TBI’s AGM this Monday night, the board and Loewy Irons – who became president after her predecessor Craig Levin unexpectedly resigned in June – are standing for election.