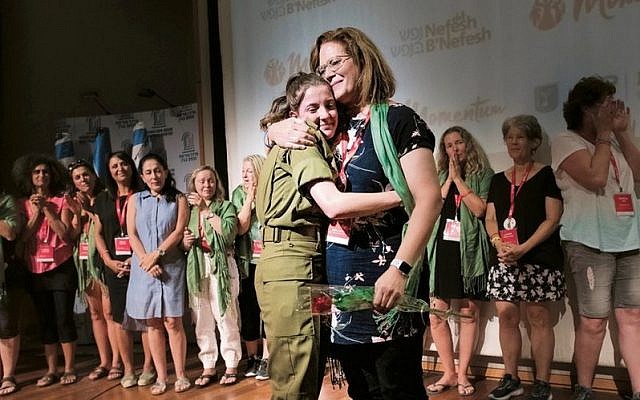 CELESTE Tucker of Perth never expected to be visiting a child in the IDF. In fact, she moved to Australia so her kids would not need to serve.

“When we left South Africa it was Australia or Israel, and we chose Australia because we didn’t want our sons going in the army,” she said, “Yet now I have my little five-feet-five daughter in the army.”

Tucker just took part in a special trip for the proudest and most worried mums in the Jewish world – mothers whose children have moved to Israel on their own to serve in the IDF.

They got to visit President Reuven Rivlin, who enthused about the contribution of lone soldiers to Israel – and more importantly they were surprised to find out that they were able to spend the entire Shabbat with their children, who were all allowed time away from their bases. Tucker said that she was overjoyed to have so much time with her daughter Sarah, a 19-year-old graduate of Carmel School who is five months into training to become a combat soldier in an artillery unit.

“The volume of tears that have been cried during our trip is crazy,” she told The AJN.

Momentum, formerly known as the Jewish Women’s Renaissance Project, brought Tucker and the mothers of 33 other lone soldiers on one of many Israel trips it ran over the last three months.

“Our son was a lone soldier, so I understand what it means for a mother to make that sacrifice,” said Momentum’s founder Lori Palatnik. “Momentum not only wanted to reunite them with their courageous children, but also empower them with a profound understanding as to why they serve.”

Momentum made contact with high-level army officials to give mums the inside track on what their children do.

“They are giving us information on how we can help them and understand what they are doing,” said Tucker, who works as executive officer of the UIA.

“We got a glimpse and an idea of what they do as soldiers. We have met psychologists who work with soldiers and met commanders. We have got to understand about the army experience.”

Tucker said that one of the most meaningful aspects of the tour was meeting other women who are in her situation – with a soldier son or daughter many miles away. “I came with a little bit of trepidation because I’m the only woman from Australia,” she said. “I had never met the other women before or spoken to them. But what we have in common is that we all have a child in the IDF and now I have a support group – there is an amazing sense of sisterhood.”

There were also lots of opportunities to kvell, she reports. “People read your name badge, see you are the mother of a lone soldier, and stop you and thank you,” Tucker said. “There’s lots of pride among the mums that our children are doing this.”