“Film music taught me basic principles of melody, countermelody, variation, tension and release,” Weiss explains. “It was all happening subconsciously from a young age for me, and I was always fascinated by how music can tell a story.”

The stories that Weiss is now telling with the Sydney Children’s Choir are tales of Jewish people from around the world, specifically focused on the Holocaust. Coming from a musical family and having played piano and saxophone from a very young age, composing was something Weiss dreamed of doing right through his schooling career. “I remember sitting at the computer and thinking, ‘well I could do this forever,’” Weiss says about his Year 12 music experience. “That was a watershed moment for me. In that moment, I decided that I wanted to be a film composer.”

In fact, he credits mentors from his school days at Emanuel, for shaping his career. In a comment on social media, Weiss writes back to Adam Majsay, who was head of music when Weiss was at school and is now deputy principal (teaching and learning) at Emanuel, “I’ll always be grateful for our awesome music classes and the creative freedom and creative confidence you gave me. That was so important for my development.”

Weiss received his first professional composing credit during his undergraduate degree at UNSW. In 2020, he was accepted into a world-renowned screen scoring program at USC, Thornton School of Music. One of just 20 people from around the world are accepted, learning from some of the biggest names in the industry. Unfortunately, due to COVID-19, Weiss was unable to take part in the course. He’s now studying a master’s degree at the Australian Film Television and Radio School (AFTRS).

Currently a conductor with the Central Synagogue Choir, Weiss was nominated for the role with the Sydney Children’s Choir by fellow choir member, Joseph Toltz, following which he met with Lyn Williams, the founder and artistic director of Gondwana Choirs. The choir had already put the balls in motion to form a collaboration with the Sydney Jewish Museum as a cultural partner, which is where they knew Weiss would shine. 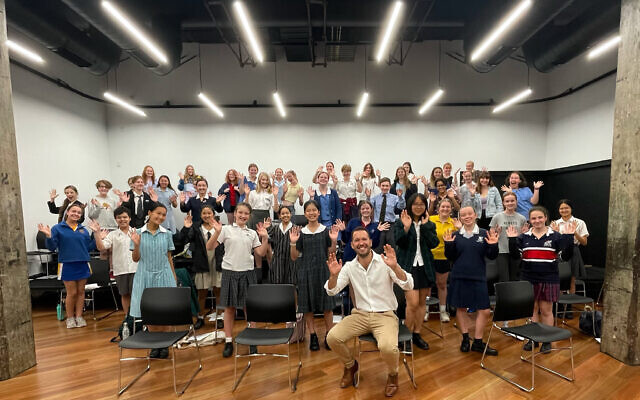 Composer in Residence Sam Weiss is honoured to be composing pieces for the Sydney Children’s Choir.

Working with children ranging from six to 18 years old, and with varying musical levels and ranges, Weiss was given plenty of creative freedom to write truly beautiful pieces of music. “Before I started anything, I thought about how I could write pieces for children that relates to the Holocaust. Because obviously, there’s a big challenge with that,” Weiss says. “What were the lessons I wanted to impart onto the children? Remembrance, perseverance, resilience, co-existence, peace and harmony.”

It’s these ideals that shine through each of the pieces Sam has composed, including In’Shal-Om (peace) – written in Hebrew, Arabic, Latin and Sanskrit – and There are Always Miracles – based on Holocaust survivor, Eddie Jaku’s The Happiest Man on Earth. “I thought, if someone like Eddie can still have an outlook like that, we can build a collective resilience, and that exposing the children to his work and his lessons would be so powerful,” Weiss said.

While it was originally written for its youngest members, the choir loved it so much that the piece ended up being performed by more than 100 children. 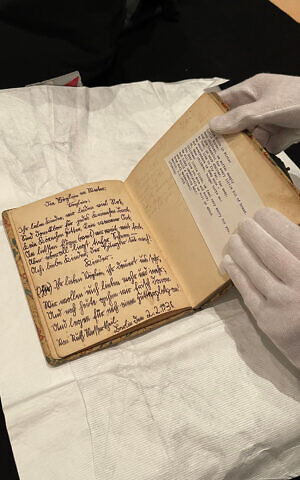 Sam’s great-grandmother’s diary which was donated to the Sydney Jewish Museum. Deine Mami was written inside.

Weiss’ most recent work, Deine Mami, an exceptionally moving story, is a poem written by Weiss’ great-grandmother to his grandmother in pre-war Germany. “It captures a feeling of love and hope for a better life. I wanted the piece to be almost like a lullaby,” explained Weiss.

The choir also commissioned a video to accompany Deine Mami, directed by former Moriah College primary student, Adam Dostalek, and filmed in the Sydney Jewish Museum. The video features Holocaust survivors honouring their loved ones, including Weiss’ grandfather honouring his grandmother Nelly, who the poem is written to.

Weiss described the experience as a personal one, allowing him to connect with family he has met, but also family who passed away before he was born.

“It was such an empowering experience to be able to write music from my heart, music that I related to and music of my heritage and all of our history, bringing it to the mainstream.”

And just like the poem, which is centred on a parent’s desire for a better life for their child, the video is dedicated to parents who wanted their children to dream.

Weiss says it’s the best advice he can give to children wanting to pursue a career in composing. Dream big, involve yourself in all aspects of music, keep at it, and something will pay off.