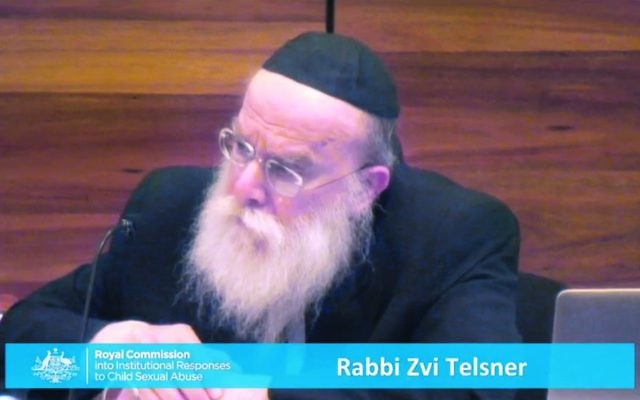 MORE than 18 months after Rabbi Zvi Hirsch Telsner resigned as the Yeshivah Centre’s senior rabbi, admitting that his conduct towards child sexual abuse victims and their families was not in line with the values of Yeshivah, he is still being paid “his regular salary”.

The stunning revelation came to light when The AJN asked the Yeshivah boards, including the Chabad Institutions of Victoria Limited (CIVL) board, questions to mark 100 days since they were elected.

“He is receiving his regular salary,” CIVL said.

“Until now, there has not been a governing body with authority to address this.

“It should be noted that his employment contract allows for certain financial compensation should his position be vacated. His official position has been in suspension since the resignation letter.”

Rabbi Telsner acknowledged his mistakes in his letter of resignation in 2015. “As a senior rabbi at the Yeshivah Centre I acknowledge and endorse its values, policies and message of continued support and compassion for victims of child sexual abuse, their families and all of the community,” Rabbi Telsner wrote.

“I recognise that my conduct towards victims and their families did not demonstrate these values or behaviour to the extent necessary of a rabbi in my position. Accordingly, I have decided to stand down from my position as rabbi at the Yeshivah Centre, effective immediately.”

A victim of child sexual abuse told The AJN this is just an example of Yeshivah’s attitude towards leaders who have made mistakes.

“It’s no longer about Rabbi Telsner,” the victim said.

“The matter is now a reflection on Yeshivah’s priorities. Eighteen months ago he resigned for mistreating victims of abuse, and our families, and he’s still being paid. It’s unheard of.”

Noting general issues of the past few years, the CIVIL board told The AJN that it understands the Yeshivah Centre let people down in the past.

“As a newly elected board we are determined to resolve that,” the board said.

“We want to build a relationship with our community – that includes the Chabad community and the greater Melbourne community.

“We want to see a Lubavitch organisation that well understands and anticipates future challenges; that has strong relationships throughout the rest of the Jewish and general community; that provides a centre of spiritual care and engagement for all members of the Jewish community and the public at large.

“We can achieve this by continuing to strengthen the transparency and governance processes.”