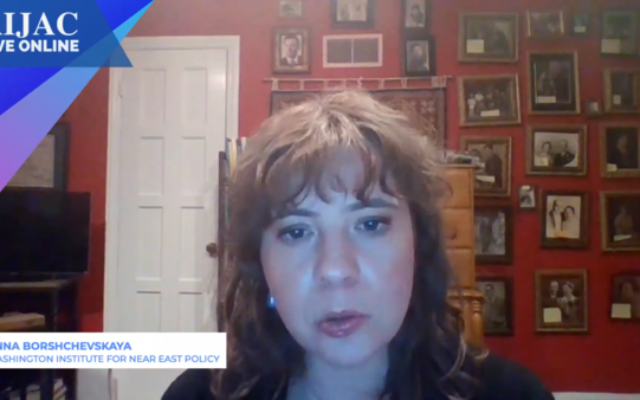 ISRAEL finds itself “in a very tough position” over Russia’s invasion of Ukraine and, with Moscow controlling Syrian skies, Jerusalem “has to walk a really fine line”, a US analyst has argued.

Addressing an Australia/Israel & Jewish Affairs Council (AIJAC) webinar on Monday, Anna Borshchevskaya, a senior fellow of the Washington Institute for Near East Policy, said, “Israel became dependent on Russia’s goodwill to allow it to continue its airstrikes against Iranian-backed targets in Syrian territory.”

Noting Ukraine’s President Volodymyr Zelensky is Jewish, she added, “What makes this all so very difficult and perhaps painful is that Israel, unlike other countries in the Middle East, has a very large immigrant population from the former Soviet Union, including from Ukraine.”

Borshchevskaya said Israel’s PM Naftali Bennett (who has personally avoided criticising Moscow after Foreign Minister Yair Lapid described the invasion as “a grave violation of the international order”) has been mooted as a mediator between Ukraine and Russia, but that is unlikely to be accepted by Russia’s President Vladimir Putin.

Russia’s infiltration of Syria’s civil war has been part of its broader aim to place a maritime stranglehold over strategic zones such as the Black Sea, bridging Ukraine and the Mediterranean, she said.

Ukraine has been a key supplier of Black Sea grain to Israel and Egypt, she explained, and more than half of Lebanon’s wheat originates in Ukraine. Threats to food and energy security could see the return to “Arab Spring”-style instability in the Middle East.

Borshchevskaya said there is a possibility Russia, a signatory of the Iran nuclear deal, could in future “be more helpful” and apply pressure on Iran, in exchange for leeway on Ukraine.

By invading Ukraine she said Putin is advancing the goals of Yevgeny Primakov, a 1990s Russian foreign minister and PM, who sought to end the status of the US as the sole superpower after the collapse of the Soviet Union. Closer ties between Russia and China are critical to this.

Describing Russia’s war in Ukraine as “the most defining post-Cold War crisis”, she said the besieged nation “is in the heart of Europe … historically Ukraine was always a democracy … For Putin … this is about eroding the US liberal rules-based order” that has existed in Europe since 1945.

AIJAC executive director Colin Rubenstein said unlike the heady years after the Soviet Union’s demise, the world now faces “a profound challenge to the international rules-based order established after WWII … we see the unvarnished efforts of Putin and Russia to reestablish the Tsarist empire”.