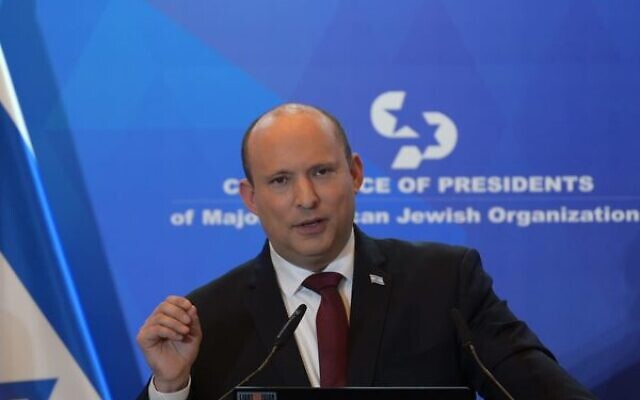 A US State Department spokesperson told the Walla news site that when then-US president Donald Trump withdrew the US from the Iran deal in 2018, senior Israeli defence officials thought the move was a mistake.

“We cannot make the same mistake another time and put off another opportunity for diplomatic progress,” the spokesperson said.

“We believe that diplomacy, alongside coordination with our allies in the region, is the best way to achieve our goal,” the spokesperson added. “We will not respond in the media about details from the talks.”

The spokesperson also said that US officials are in contact with their Israeli counterparts on a “daily basis” and that Washington “will continue to consult with the Israeli government regarding the way forward”.

In a speech on Sunday to the Conference of Presidents of the Major American Jewish Organisations, Bennett said that the emerging Iran deal will “likely create a more violent, more volatile Middle East”.

Bennett also lamented the fact that the deal would give Iran access to billions of dollars when the regime is on the ropes.

“Right now they are very weak,” he said. “The rial has depreciated. They are at their weakest spot in history.” Yet, under the imminent deal, tens of billions of dollars will be poured “back into this apparatus of terror”. And, he warned, “much of this money will be funnelled towards attacking Israel”.

Bennett set out three points that needed to be addressed in light of the looming deal:

“1. The agreement leaves Iran with a fast track to military-grade enrichment. And in the time until it sunsets, they won’t even have to destroy all those centrifuges they developed over the past few years.

“2. The Iranian regime is insisting on closing the open files of the IAEA – these are ‘hot investigations’ pertaining to possible military dimensions. Or in simple English: Iran has hidden and is still hiding nuclear-weapon related materials. It has been caught red-handed, and Iran is demanding that the inspectors that caught them will pretend to forget what they saw.

“3. The agreement will pour money, billions of dollars, into the Iranian terror machine – more UAVs, more attacks on ships, more rockets on Israel and our allies through its proxies.”

Bennett also revealed that, in the ongoing negotiations, “to cap the chutzpah – Iran is demanding to delist the IRGC (the Islamic Revolutionary Guard Corps)” as a designated terrorist organisation.

“Do you understand? They are now asking to let the biggest terror organisation on earth off the hook.”

Despite the “set of new challenges for Israel’s security” created by the agreement, Bennett concluded on a positive note, assuring the audience at the Inbal Hotel that Israel is up to the challenges.

“There is no doubt in my mind that we will prevail,” he said. “Yes, this agreement will enrich this brutal and corrupt regime – but this is only temporary. If I were an investor, Iran is the last place I would invest in. Nobody in his right mind should invest in a country whose number one export is terrorism.”

Israel, by contrast, he declared, “is stronger than ever, growing by eight per cent in 2021, a year of COVID. Our economy is booming and will continue to grow, becoming more competitive and less regulated. Our hi-tech is breaking all records. We are adding more Jewish men and Arab women to the workforce. We ensured political stability, passed a budget, and our path is as good as ever.”

Bennett assured the audience that Israel is “building unprecedented military capabilities … So yes, there are challenges, but we are up to them.”

Insisting that Israel would not tolerate Iran as a threshold nuclear state, he stressed: “We have a clear and un-negotiable red line: Israel will always maintain its freedom of action to defend itself.”

The Prime Minister’s remarks came as Western officials indicate that an agreement to restore the deal is possible within days.

According to a Channel 12 news report on Monday, a renewed deal will effectively remove the possibility of an Israeli airstrike on Iran’s nuclear facilities.

However, the network reported that Bennett and Mossad Director David Barnea are working on a new strategy to weaken Iran through economic means, as well as continuing to counter Tehran’s efforts to further entrench itself and its proxies on Israel’s borders.

The report also said Israeli officials were readying for the deal’s expiration in the coming years, and were preparing to speak with world powers on ensuring that a follow-up accord will be longer and stricter.